A prophet from Zananda Village under Chief Nhema’s area in Shurugwi, Midlands province may not be able to perform in bed again after his manhood was sliced with a piece of a broken beer bottle by a gold panner who had caught him having s.£.x with his wife in their matrimonial bedroom. 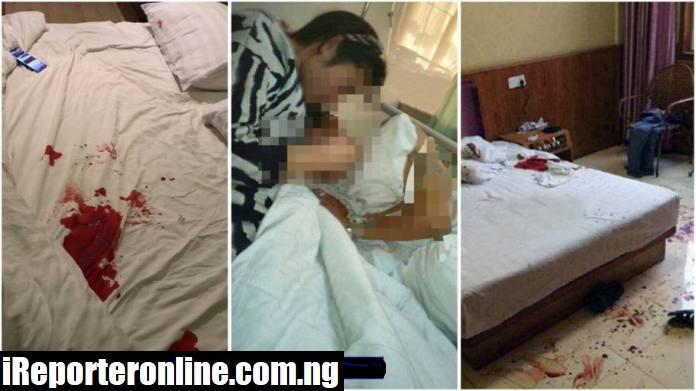 According to B Metro, Madamba was enraged when he unexpectedly came home to find his wife canoodling in bed with Madzibaba Richy.

Read Also I Give My Wife Every Style In Bed Yet She….. – Man Laments After He Caught His Wife In Bed With A Prophet (Video)

According to a source from the area, Mapuranga was frequenting prayers and fellowships at Madzibaba Richy’s church until she became so close to the “Man of God”.

It is alleged that Madamba, who also suspected his wife of cheating on him, had his suspicions confirmed when he came home unexpectedly.

Upon arrival, he couldn’t believe his ears when he heard his wife groaning in pleasure while enjoying the prophet’s one-eyed monster.

Boiling with anger, he forced open the door and found the two giving each other the time of their lives. Madamba short-circuited the two lovebirds’ intimate act when he started assaulting them.

“He first threw several punches to his wife and intensified his assaults with booted feet before he turned to Madzibaba Richy. He violently pulled him and kicked him all over the body before he struck him several times with a beer bottle on the head.

“And things took an even more sinister turn when he broke a beer bottle and used its pieces to stab Madzibaba Richy on his back and manhood.

“Reports from his relatives are that he has not had an erection since and it is feared that the injuries might be permanent. He is also having trouble urinating,” said the source who declined to be named.

The source further said during the attack both Madzibaba Richy and Mapuranga screamed like trapped animals while receiving thorough hiding from Madamba.

Although Madamba could not be reached for comment, his wife confirmed the incident. She, however, disputed that she was caught having s_ex with Madzibaba Richy.

“What you heard is untrue. When my husband came home, he just found Madzibaba Richy in the house conducting some prayers. How can we have s_ex in the presence of children? He was just incensed why I had invited him without his consent,” said Mapuranga before she hung up her phone.

After he suffered the horror assault and out of shame Madzibaba Richy reportedly left the area to an unknown destination.

I Give My Wife Every Style In Bed Yet She….. – Man Laments After He Caught His Wife In Bed With A Prophet (Video)