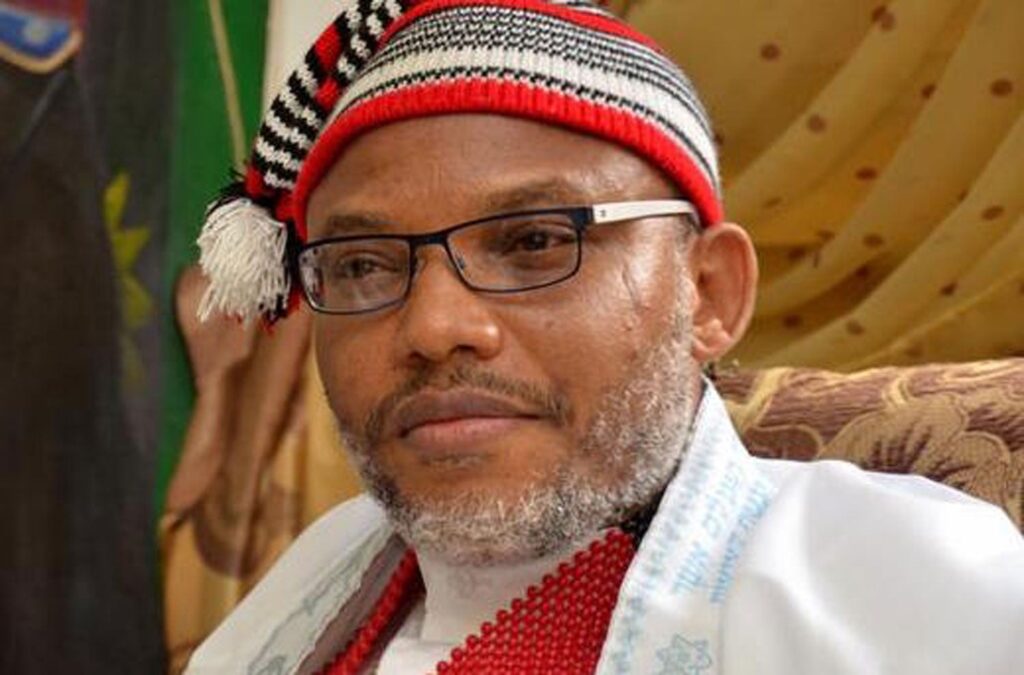 A video of Nnamdi Kanu, the leader of Indigenous People of Biafra giving instructions to his followers to go on a wave of destruction and attacks, in the guise of the #EndSARS protest around October 2020 has resurfaced in the social media.

The video emerged just some two months to the planned 2nd anniversary of the protest by IPOB members in Lagos.

According to an announcement, Labour Party Presidential candidate, Peter Obi, being supported by the separatist group, is billed to address the gathering.

In several versions of the video in circulation, which offer a disturbing deconstruction of the protests, Kanu’s voice can be heard crisply and clearly handing instructions to his army of IPOB activists to burn down “Bola Ahmed Tinubu’s hotel”, which in his imagination was the Oriental Hotel in Lekki Lagos.

He told them to attack Governor of Lagos, Babajide Sanwo-Olu.

He also instructed them to kill policemen and burn down their stations throughout the country.

The Oriental Hotel, a Chinese owned hotel that Kanu said should be targeted is located near the Lekki Toll Gate, the redoubt of the IPOB activists turned #EndSARS protesters.

The hotel survived the planned arson after it sought reinforcement by security men and also issued a statement debunking rumours of Tinubu’s ownership.

But the head office of TVC and Radio Continental, which the IPOB activists alleged was owned by Tinubu was burnt down, with investment of over N5billion going up in flames.

Historic buildings such as the colonial high court building at Igbosere, in Lagos, many police stations, BRT Terminus in Oyingbo, a theatre at Opebi, owned by Lagos state government, were all burnt down.

The toll gates at Lekki and Ikoyi Link Bridge were burnt, as well.

Read Also Slay Queen With Big Backside Stops Her Range Rover In The Middle Of A Busy Road, Causing Inconvenience To Other Motorists (VIDEO)

“The protest is going on now, no going back. They think it was like before when you come, you shoot, shoot, you go and commission of enquiry”, Kanu says in the video.

“Any where you see Sanwo-Olu, you attack him. Tinubu’s hotel must be burnt down. Burnt down, mad people Nigeria”, he says.

A caller breaks the broadcast:

“Where are you calling from,” Kanu asked.

The caller identifies himself in a cracked voice and says he is calling from somewhere in South east Nigeria:

Nnamdi Kanu: What is happening, you lost your voice. Were you leading the protest today? Were you the one leading it?

The caller speaks about the protest in Onyigbo. Says the police did not attack them as they moved in a procession.

But Kanu corrects him and says the name of the town is Obigbo.

“If the police move, you move them. You know that is what they use to say to us. If the police try anything, get hold of them, kill them and burn down their police stations. That is the price they are going to pay.

“They are zoo animals. They think they can intimidate us like before. This is generation 2020.

“This generation cannot take any rubbish anymore. Enough is enough. And there is no going back.

Another caller from comes online.

Nnamdi Kanu identifies the officer who led troops to the Toll Gate in Lagos as an Igbo person.

“That is what Fulani does. He is an Igbo man,” Kanu said.

Superyacht Worth £20,000,000 Goes Up In Flames A Month After Being Delivered