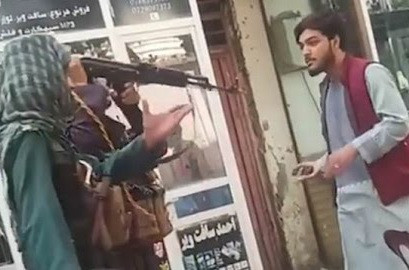 A Taliban fighter was filmed hitting a young man with the tip of his rifle for playing music on his mobile phone.

The Kabul man was walking on a shopping street in Kabul when the Taliban accosted him, shouting, and hit his neck with a rifle, leaving him reeling in confusion.

The Kabul man is said to have broken the Taliban’s harsh sharia code by playing music.

After hitting the Kabul man, the Taliban militant lifted his rifle to hit him again before another armed Taliban member intervenes and allows the man to continue making his way along the street in the K? The new district.

The video, obtained by Metro UK, shows the clampdown on people’s freedoms since the Taliban took over power in Afghanistan.

The British national, originally from Afghanistan, who supplied the footage, said: “The man was struck just for playing music on his phone.

“The Taliban are bringing in a lot of harsh restrictions, for example, if you shave your beard you also risk being tortured and abused.

“While the British forces and the Americans are at the airport the Taliban are not enforcing a lot of the laws but when the international forces go they will apply to every single person.

“I am really scared for my family still in Afghanistan.”