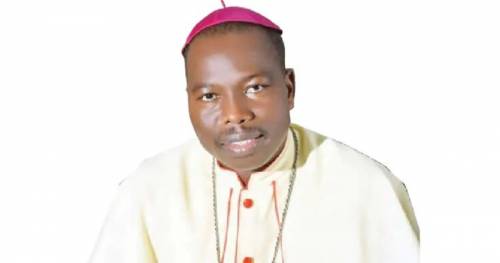 The Bishop, Catholic Diocese of Yola, Reverend Father Stephen Mamza, has explained why the church built a mosque for internally displaced Muslims at the St Theresa Camp in Yola, Adamawa State.

Mamza stated that since a church was built for the Christian IDPs by the Catholic, the church authorities in Yola also thought it fair and just to provide a “place of worship for the few Muslims among them.”

The Catholic Bishop stated this in an interview with Punch, adding that the Boko Haram insurgency was a monster which the church was contending with, going by the large numbersof IDPs in the camp.

The Reverend Father said, “As you know, since 2014 the Catholic Diocese of Yola, has been involved in taking care of displaced victims of insurgency – those displaced from southern Borno and also northern Adamawa, who ran into Yola for refuge. So, the church opened its doors so that these people could put up. At a certain stage we had over 3,000 people living on our church premises. Most of them returned to their original homes after the military reclaimed their homes.

“But again, there are those who still face threat of insurgency, especially those living at the border of Sambisa forest and cannot go back to their homes because of the activities of Boko Haram since 2014. These people have been at the camp that we set up for IDPs at St. Theresa Cathedral. So, we thought of what we could do to improve their living standards. Because we were becoming weary of taking care of them and even for our donors fatigue was setting in. And the IDPs themselves were getting tired of staying in the camp – it is not easy for anyone to live for seven years in a small tent in a camp with children. So, I thought of building a place where the IDPs could be resettled.

“And thanks be to God, through the support of Mesio in Germany, we started last year in January the construction of 86 units of houses to be built for the 86 families still in our camp. On the housing estate, we built a church and a mosque and a school for the IDPs, which will soon be inaugurated. Already some of the IDPs have been moved into the estate.

“In the first place, when we played host to these IDPs, we did not discriminate against any one of them. We didn’t ask what religion the IDPs belong to; we didn’t ask for their church denomination; we just treated them as human beings who are in need of help, irrespective of their religion, denomination or tribe. The majority of the IDPs who thronged our camp were Christians but there was also a large number of Muslims among them. And if we were able to build houses for all of them, and also built a church for the Christians among them, then it is only a matter of justice and fairness that we also provide a space of worship for the few Muslims among them.

“There are about 10 to 12 Muslim families in the camp. I just felt that since we didn’t leave out the Muslims while providing food for the Christians or leave the Muslims out while building houses for the Christians, it is only just that we also build a mosque for the Muslims as we built a church for Christians. It is not something that is commonly done; it is not something that we have heard of being done, especially in our country, Nigeria, where everybody is conscious about their own religion.”