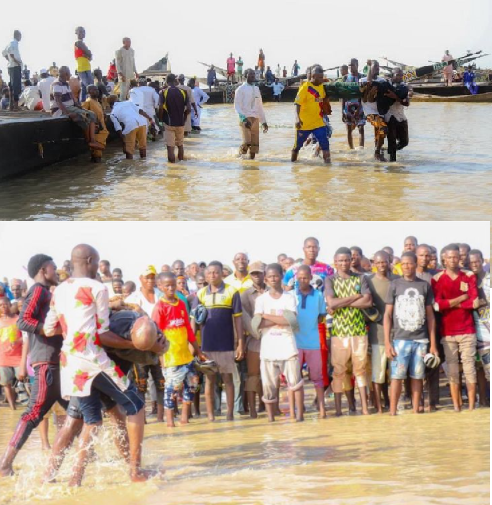 There are fears that many of the victims would not be removed from the river alive considering the low pace of rescue efforts occasioned by poor equipment.

The incident occurred in Ngaski Local Government Area of Kebbi State at about 10 am.

Apart from the people on board, the wooden boat was said to be carrying bags of sand for gold miners, motorcycles and other equipment as the locals were heading for a local market.

Sources said that while authorities were using outdated equipment to bring out those trapped under the water, many local divers were using crude methods to search for the missing passengers including men, women and children.

The Area Manager of the National Inland Waterways Authority (NIWA) in Yauri, Kebbi State, Mr Yusuf Birma, confirmed the incident adding that it was caused by overloading and a weak boat.

He said that four people had been confirmed dead, 20 rescued alive while 156 people are still missing and that rescue operation was still ongoing.

“The boat is carrying 180 passengers with 30 Bajaj motorcycles. The victims were going to a market in Malele in Borgu Local Government Area of Niger State from Kebbi and the incident happened just a few hours into their trip.

“We are still rescuing the victims and the mishap occurred as a result of overloading. The boat does not have the capacity to carry 180 passengers.156 people are still missing and they are believed to be underwater,” he said.

Speaking further on the cause of the mishap, Birma said that most of the boats being used by locals across riverine states were old.

He said in the latest incident, the overloaded and old boat hit a log while sailing.

“The boat involved is a wooden boat which is old and very weak but these people will not listen when we speak to them to reduce the number of passengers they carry,” he said.

The chairman of Ngaski LGA, Abdullahi Buhari Warra, described the accident as fatal and pitiful.

He said five people including two women, two men and a girl have been buried.

According to him, those in the boat included artisanal gold miners, traders and some Nigerien nationals. He said more corpses were expected to be recovered today.

“As I am speaking to you now, there are many people in the river who are yet to be rescued…there is no hope of getting them alive,” he told one of our correspondents.

In fact, many people have died and nobody can precisely know their number.

“We are able to rescue only 22 people who have been rushed to the Warra General Hospital for medical attention.

“In fact, we went to the main river in Wara town where there were people crying when they came out of the water. Someone who came out of the boat said there were many small children who drowned because there was no one to rescue them.

“Someone people from Zamfara State told me that there were eight members of the same family and they all drowned,” he said.

He, however, said it was not the fault of the Kebbi authorities for overloading the ship and accused the people of refusing to wear life jackets.

“We are currently providing seven boats to the navy and other rescue workers to search for corpses and some survivors,” he said.

The Niger State Emergency Management Agency also confirmed the incident adding that it didn’t happen in their state.

President Buhari, in a statement issued by his spokesman, Garba Shehu, condoled the families of those affected by the tragedy.

The President extended his gratitude to all those involved in the rescue efforts and wished those injured from the accident quick recovery as the efforts to recover more survivors continued.

The boat ferrying local traders split into two after hitting a log during a storm as they were returning from a local market, according to emergency officials.

The Director-General of the State Emergency Management Agency, Ahmed Inga, said the occupants of the boat were 100 passengers coming from Tija village of Munya Local Government Area of the state.

Kilometre: Tinubu Moving Miles Ahead As Nigeria Braces Up For The 2023 General Elections (Freestyle)