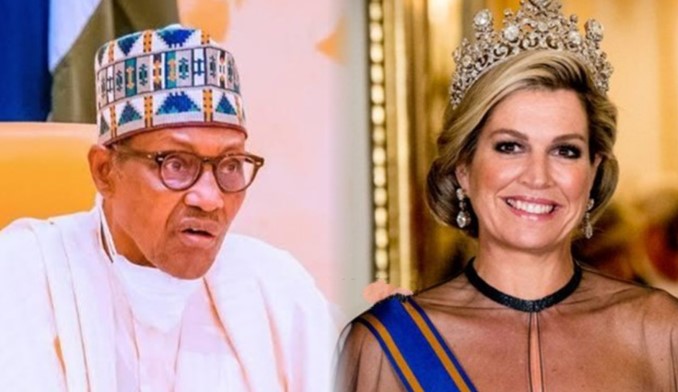 President Muhammadu Buhari has appealed to the Queen of Netherlands, Her Majesty, Maxima Zorreguieta, to support his administration’s efforts at developing critical infrastructure in Nigeria.

Buhari held a bilateral meeting with Zorreguieta on the sidelines of the United Nations General Assembly holding in New York, USA.

A statement by the President’s Special Assistant on Media and Publicity, Femi Adesina, said Buhari, during the closed-door meeting, stressed the importance of infrastructural development for the advancement of any nation.

He said Nigeria was well aware of her limitations, and thus prioritized the provision of infrastructure, NAN reports.

“Without infrastructure, development would be limited, so we put emphasis on building roads, rail, and providing electricity. We have a comprehensive plan, and we are doing our best”.

”We have the land. We have the people. Capital input is what we need. he said.

He added that the country was hampered by resources, despite oil exportation, and that with more financial wherewithal, infrastructural works would speed up.

President Buhari assured the Queen, who last visited Nigeria in 2017, that if she comes again, she would see a lot of difference in the nation.

In the area of agriculture, the president said Nigerian borders were closed to some neighbouring countries to encourage farmers.

He said, ”People went back to the land, and this helped us tremendously. We made fertilizers available, resuscitated dams, and it all paid off handsomely. Otherwise, with about 200 million people, we would have been in trouble when COVID-19 struck and affected the economy.”

He added that Nigerian farmers were quite receptive to modern ways of doing things, especially in respect of cutting post-harvest waste.

READ ALSO: We Are Remorseful For Voting Out Jonathan To Elect Buhari -Northern Elders Forum

Queen Zorreguieta lauded what she called “the huge effort” made by Nigeria to combat the Coronavirus pandemic, saying; “you spent a great part of your GDP.”

The Queen said agriculture was music to her ears, being the daughter of a former Minister of Agriculture, and her biggest plea would be for Nigeria to make infrastructure available so that investors and aid donors could access areas beyond the major cities.

“We need roads, railways, digital financial inclusion for farmers. The government needs to digitalize all payments,” she said.

How Black Foreigners Was Paid $500 Each To Protest Against Yoruba Nation -Prof. Akintoye