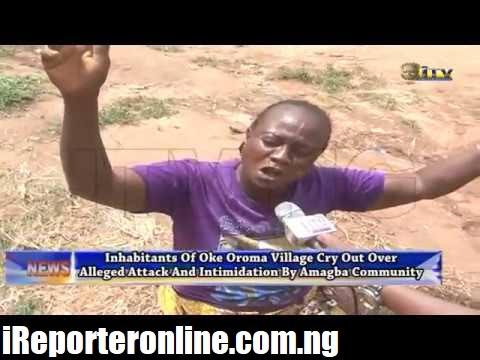 It was a reign of terror a little over a week ago in Edo State as alleged members of Amagba community and Obazagbon youths invaded the sleepy community of Oke-Oroma leaving behind a trail of irreparable damage. It was all sorrows, tears, and blood.

It all started on the 11th of August 2021 when the soldiers mounting security checks at Oke-Oroma community suddenly disappeared without a single warning about their exit putting the community in deep apprehension.

According to residents of Oke-Oroma community, there has been huge pressure on the Brigade Command to withdraw its soldiers providing security for its residents.

As if to confirm their fears, the following day, 12th of August at about 3 am all hell was let loose as alleged youths from Amagba and Obazagbon alongside some unknown gunmen fully armed with powerful AK 47 riffles started unleashing terror on every living thing on sight, from humans to even animals none was spared in the ferocious and brutal attack.

Many houses were destroyed including the town hall and Odionwere’s mansion. A respite however came the way of the heavily bombarded community hours later when their cries of backup were answered with the deployment of some vigilante and civil defense corps who finally restored law and order while making some arrests and recovering some AK 47 riffles and Pump-action guns. The suspects are currently held at the 4th Mechanized Brigade in Benin City.

Since the second quarter of 2012, Oke-Oroma community has cried out about the persistent and consistent attack on their unarmed indigents by  Amagba together with Obazagbon community killing some of them and destroying many houses and vehicles including the Elders (Chambers) traditional chambers with Ignominy.

They have written various petitions to all the security agencies but yet they have not received the desired results.

The inability of the security agencies to bring the culprits to book all these years leaves an impression of a conspiracy theory and thus promoting communal strife and war. It also opens the floodgate of anarchy, the consequences of which are of immense and unbearable proportions which could degenerate into full-scale communal war.

Land grabbing and communal violence undermine the rights of the local people who live and work in the geographic locations that are invaded by these land grabbers. It has devalued their properties and has made them landless while their farmers can no longer go to farm due to the fear of attacks.

Here is a timeline of heinous havoc wrecked by Amagba and Obazagbon community as listed by residents of  Oke-Oroma community.

Destruction of properties, gardens, and burnt several cars including the Odionwere’s modern mansion.

Injuries to Okoroma residents (many had their legs amputated).

Desecration and destruction of Oguedion amulet and house.

Forcibly arrested over 10 residents of Okoroma village during a meeting on 20th May 2017 under false and malicious allegations that they are armed robbers.

Unlawful and false detention of some residents, used motor saw to cut down age-long traditional trees including the ancient Ikhimwin tree.

Their chains of incredible and inhuman atrocities have left the community devastated, caused untold pains, hardship, and permanent depression to the innocent and unarmed villagers.

On no account should man destroy the life of fellowmen because he wants to acquire illegal properties and lands. Land grabbing is evil and should be expunged out of existence.

The people of Oke-Oroma are crying out for help, they have written the State Governor, Godwin Obaseki to intervene in the unfortunate crisis.