Some Nigerians have commenced #RevolutionNow and #BuhariMustGo protest in Abuja, Nigeria’s capital city on the country’s Independence Day anniversary. 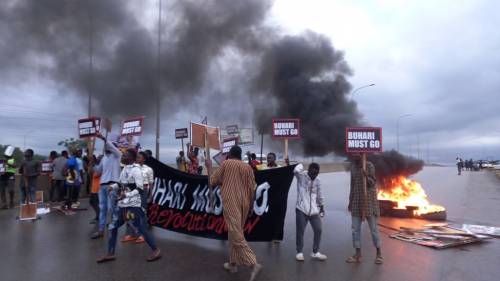 Early on Friday morning, October 1, the protesters could be seen chanting and displaying banners and placards saying ‘Buhari Must Go’.

Nigeria is marking its 61st Independence anniversary on October 1 this year.

Human rights activist, Omoyele Sowore had on Thursday Nigerians to protest across the country on independence day to reject President Muhammadu Buhari.

The activist was reacting to a statement released by a presidential aide Femi Adesina on Thursday titled ‘October Independence Anniversary: President Buhari to broadcast to the Nation’.

“I am urging all citizens and non citizens of Nigeria to boycott @MBuhari’s national “INDEPENDENCE DAY” broadcast scheduled for tomorrow, instead you should partake in protests across d country tomorrow to reject this man,the Failure-In-Chief of the Federal Republic #BuhariMustGo https://t.co/HbEQ0lpyPV,” he said on Twitter.

On Facebook, the activist posted,” What is this Failure-In-Chief going to broadcast to the country? #RevolutionNow #October1stProtest #BuhariMustGo.”