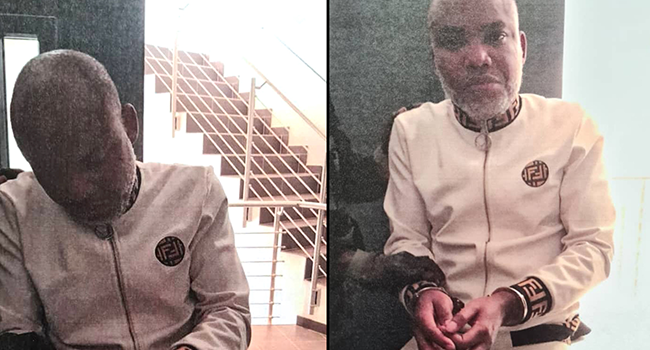 Leader of the Indigenous People of Biafra, Nnamdi Kanu will remain in the custody of the Department of State Services despite a request to transfer him to Kuje correctional centre.

Justice Binta Nyako of the Federal High Court gave the order on Monday during the resumption of Kanu’s trial in Abuja.

In an application to the judge, Mr Kanu had argued that he cannot get a fair trial if he remains in the custody of the DSS.

He also sought for an order to grant him access to his medical doctor for the purpose of carrying out a comprehensive independent medical examination on him.

In her verdict, Justice Nyako ordered that the DSS should allow access to Mr Kanu, although it won’t be a free-for-all.

With Mr Kanu absent in court, the judge adjourned the trial to October 21.

The DSS said Mr Kanu’s absence in court was due to logistics reasons.

Mr Kanu was first arrested by Nigerian authorities in 2015 on an 11-count charge bordering on “terrorism, treasonable felony, managing an unlawful society, publication of defamatory matter, illegal possession of firearms and improper importation of goods, among others.”

He had fled Nigeria in 2017 after he was granted bail for medical reasons.

Before his re-capture by Nigerian authorities, he had been sighted in Israel and had continued to rally his supporters in Nigeria to employ violence in achieving secession.

Kanu was intercepted on June 27 and was repatriated to Nigeria in a shadowy operation conducted by Nigerian security operatives in collaboration with international partners.

The Nigerian government has promised to grant him a fair trial.