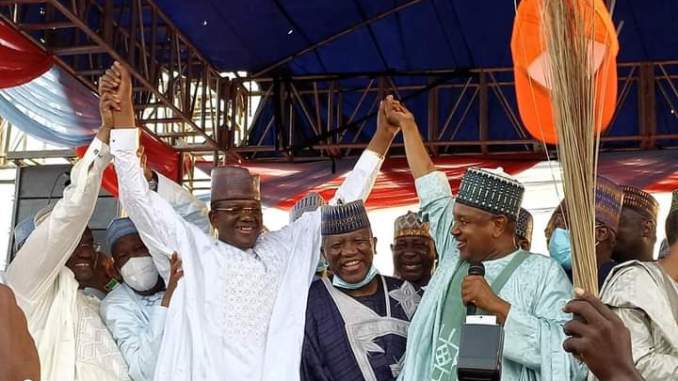 Zamfara state governor Bello Mohammed Matawalle has finally defected from the Peoples Democratic Party (PDP) to the All Progressive Congress (APC) the ruling party in the Country.

Speaking during the grand occasion held at Zamfara Trade Fair Complex in Gusau, Matawalle said he “is now the leader of the APC in Zamfara.”

Matawalle enjoined all members and supporters of the APC in the state to come together and build new Zamfara and APC ahead of 2023 general election.

Matawalle commended President Muhammadu Buhari, the national caretaker committee leadership of the APC under the leadership of Alhaji Maimala Buni, former Governor Abdulaziz Yari as well as all stakeholders for their understanding, promised to carry everyone along for the development of APC and Zamfara State in general

In his remarks, the national caretaker committee chairman of the APC, Alhaji Maimala Buni expressed concern about the governor Matawalle defection to APC in Zamfara State, stressing that the national leadership of the APC will work closely with Governor Bello Mohammed Matawalle to attain the desired objectives.

Blueprint reports that Governors of Kano, Niger, Kaduna, Katsina, Borno, Kebbi, Plateau, Gombe, Kogi and federal government delegation under the leadership of the secretary to the government of the Federation, Boss Mustapha, Ali Modu Sheriff, Senator Ahmed Sani Yerima and other dignitaries were among those attending the occasion.

However, our Correspondent reports that all the three senators, six members of the house of representatives, 26 Zamfara State House of Assembly members have also followed Governor Bello Mohammed Matawalle to APC, except the deputy Governor Mahadi Aliyu Gusau who refused to follow him.