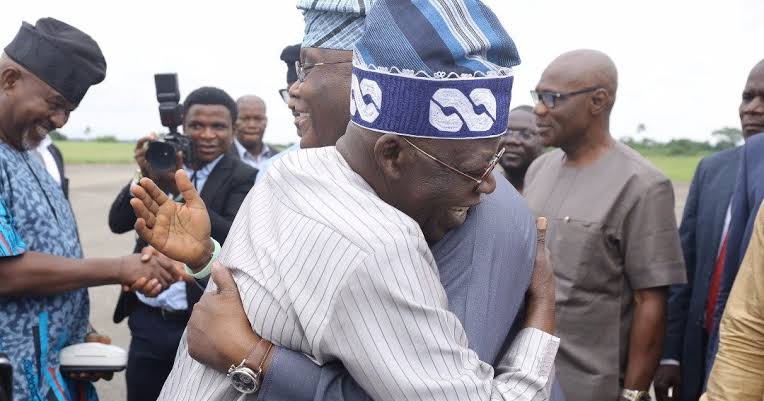 Atiku arrived from the United Arab Emirates (UAE), the same time Tinubu was within the premises.

Tinubu walked towards Atiku as he alighted from his vehicle and they exchanged pleasantries.

The development confirmed the two are not enemies as suggested in some quarters.

Despite political leanings and different party affiliation, the prominent politicians are longtime allies.

Tinubu is the national leader of the All Progressive Congress (APC), while Atiku was Peoples Democratic Party (PDP) presidential candidate in 2019.

In October 2020, Tinubu attended the wedding of Aliyu and Fatima, the children of Atiku and Nuhu Ribadu, ex-Chairman of the Economic and Financial Crimes Commission (EFCC).

Nigerians on Twitter are reacting to the latest meeting, advising citizens, especially the youths, not to die for politicians.

@konis_v: If you like, die in their fight. We citizens are the pawns in this game of chess.

@adamugarba: Their aim? Political Power. But you are busy blocking/insulting people for just disagreeing with you. Remind me of your aim again.

@femi_atere: In Nigeria politics, we only have political opponents. The rants and bants end in the field of politics. Once their interests and greed intersect they become colleagues. To Nigeria youths, if you like, kill yourselves in 2023 for them.

@EmmaMillelJnr: Those who have permanent political enemies, shine eyes woo!

@TheOladeile: I am not surprised that Tinubu received Atiku at the airport. Both men have been allies in business and politics for decades.