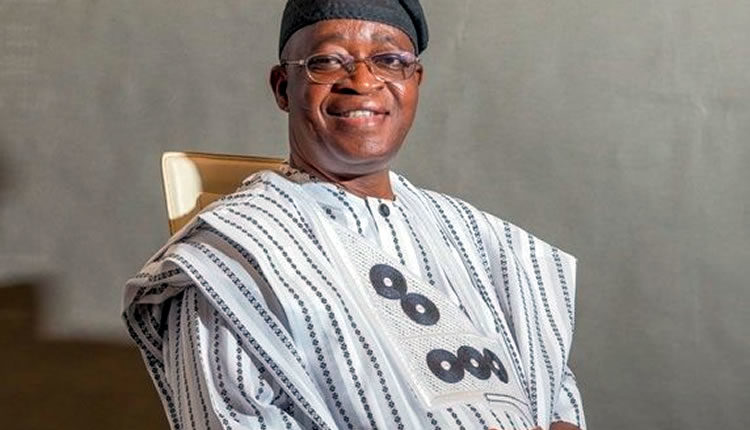 Governor Adegboyega Oyetola of Osun was Friday crowned as the Vanguard Newspapers’ Governor of the Year 2021 for Good Governance.

He was honoured for delivering “dividends of democracy without taking loans” in the last three and half years at a colourful ceremony, held at Eko Hotel and Suites, Lagos.

Oyetola was accompanied to the event, tagged: “Vanguard Personality of the Year 2021,” by his wife, Kafayat; his children, Speaker, Osun House of Assembly, Hon. Timothy Owoeye; Secretary to the State Government, Prince Wole Oyebamiji; Chief of Staff, Dr Charles Akinola; Finance Commissioner, Bola Oyebamiji; Information Commissioner, Mrs Funke Egbemode; former member of House of Representatives, Hon. Ayo Omidiran, friends and well-wishers. Justifying the award, Vanguard said the governor’s choice was basically on empirical facts and indisputable statistics on the geometric transformation that the state and her people had experienced under his watch since his assumption of office.

It added that the philosophy of the award was to recognise and celebrate excellence, national pride and service to humanity.

It further said: “Since assumption of office you have delivered the dividends of democracy without loans. It is on record that you have prudently managed available resources while your administration has kept faith with the people and maintained fidelity with your electoral promises.

“We also noted the crisis in the education sector and how brilliantly the governor has resolved it. One other thing we have seen is the character of Mr Governor: no crisis, no rancour. In fact, we have seen the highest level of decorum in governance.

“So, what seemed im- possible before is now be- ing made possible under the leadership of Governor Oyetola. That is why it was deduced from the last primary election, ‘a battle between half salary and full salary’ as seen in the social media.

“Generally, this nomination for the award of Governor of the Year for Good Governance is actually an encouragement award on how the governor has raised the pedestal of governance for the people of Osun and beyond.”

Responding on the sidelines of the event, Governor Oyetola, who dedicated the award to the Osun electorate for giving him the opportunity to prove his mettle, said “The reward for hard work is more work. The Vanguard Newspapers have said a lot about our little contributions to advance the economy of the state and provide quality leadership for our people as regards our commitment to changing the narrative of Osun from being a civil service state to a highly industrial and commercial-based economy among others.

“I accept the award wholeheartedly. It is the best award I am getting this year.”