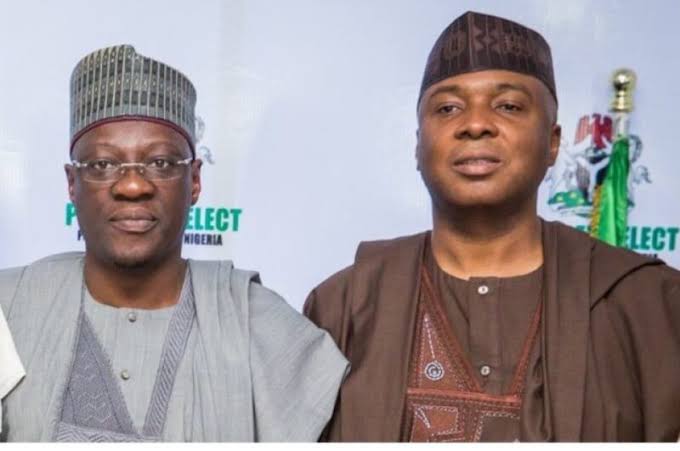 Governor AbdulRahman AbdulRazaq had set up the committee to investigate unlawful sales of the state government properties from May 29, 1999, to May 29, 2019.

A statement by the Chief Press Secretary to the governor, Rafiu Ajakaye, quoted the Chairman of the panel of inquiry, Hussein Buhari, as saying this while submitting the White Paper to the governor at the Government House in Ilorin.

The panel set up by Mr AbdulRazaq on the unlawful sales of government properties also recommended that the Kwara government prosecute Bukola Saraki, Mr Ahmed, and others for alleged economic sabotage.

He said findings in the report were mind-boggling and nothing short of prosecution, possible jail terms, and recovery of properties.

Mr Buhari claimed that the former governors and many of their aides had questions to answer how public properties and shares were sold under questionable circumstances, including on the eve of their departures from public offices.

He pointed out that none of the officials honoured the invitations to clear the air on the deals, advising the administration to prosecute them as a matter of justice.

He further explained, “The committee swung into action immediately it was inaugurated and went through the report of the Judicial Commission of Inquiry on the sales of Kwara State Government Assets between May 1999 and May 2019.

“There are so many rots perpetrated by the past governments, especially in the 16 years before 2019. For instance, the rots on Shonga Farms, Satellite Motel, and our properties in Kaduna, Abuja, and Lagos were simply inconceivable.

“They were all sold to themselves at giveaway prices. We saw criminal conspiracies. In fact, Kwara State is now heavily indebted to some people because the past governments mismanaged our properties.”

Mr Buhari urged the Kwara governor to show courage and political will to implement the report so that everybody found wanting will be brought to book.

“The Electoral Act is very clear that anybody who is found guilty of mismanagement of resources be banned for 10 years from holding political office,” he said. “We wish the government will accept our recommendations and set up an implementation committee.”

According to him, there are so many instances of the indicted governors and their officials using their positions to acquire government properties in questionable circumstances.

“For instance, the High Court Complex in Tanke, Ilorin, they removed all the steels and allocated the land to themselves,” he said, “they built hotels and eateries on government properties.”

Speaking further on the panel’s findings, Mr Buhari noted, “All our houses in Kaduna have been sold. Today, apart from our liaison office, we do not have anything in Kaduna. Government should take them to court and prosecute them for economic sabotage, and, if found guilty, the government should ban them from holding political offices for 10 years.

“Also, some ministries, bureau of lands, surveying office, and many other offices had shady deals with our land in Kwara state. So, anyone involved should be sanctioned and prosecuted according to the civil service rules.”

Arguing further on the need to bring Messrs Saraki and Ahmed to book, Mr Buhari asserted, “Even if they have retired, they should be brought to book because the connivance was too much. Look at what happened at KWTV. They sold almost all the land at KWTV to themselves. Despite the fact that you must leave certain meters away from the television mast, those rules were jettisoned.

“Also, Noktel Hotel is built right on top of the aquifer which supplies water to Agba Dam, Ilorin. What we observed is unbelievable. So, for the hotel, we recommend outright demolition of it. Because they knew what they were doing, they have now blocked water from flowing to the dam.”

Based on what “we discovered,” Mr Buhair accused Messrs Saraki and Ahmed of conniving with others “to perpetrate evils.” He alleged that they refused to appear before the panel and “defend themselves.”

“Also, our shares, bonds, and stocks were sold out within five weeks of their leaving office. These are worth billions of naira. Even, the Amoyo International Market in which they claimed that they bought land for over N400 million and paid about N200 million and also swapped 10 pieces of our land in Abuja for Amoyo land by Harmony Holdings Limited. Personally, Bayo Sanni and Tope Daramola need to be brought to book on the issue,” he added.

“On Shonga Farms, you brought 13 farmers, and you gave them land and huge money in foreign currency, and yet nothing was remitted to the state government. They did not stop at that. They mortgaged the same land and collected money from different banks.”

Receiving the report, Mr AbdulRazaq said he had noted the recommendations to prosecute all those indicted in the white paper and promised to act on them.

Protest In Ikorodu As Trailer Crushes Four To Death