The Phenomenal Guitar Boy Transits Without His Mammy Water Inspired Guitar: Being a tribute by the Benin National Congress for Prof. Sir Victor Efosa Uwaifo MON

On August 28, 2021, the ‘Guitar Boy’ dropped his Guitar, the Joromi’s and Mami Wata exponent; the extraordinary Edo folklorist, Philosopher and Cultural Ambassador Plenipotentiary left for ‘Erinmwin’ without carrying his famed Guitar. It was a big shock to his teeming fans across the globe,having recently celebrated him at 80 years. Everyone’s desire was to have him around for many more years. But the inevitable destiny of all mankind came like thunder with a loud announcement, took away the Legend.

Prof Sir Victor Efosa Uwaifo MON, JP, was, without doubt an inventor, a philosopher, legend, sculptor, architect, engineer, sportsman, and humanist. He was a prodigy who, early in life, through curiosity and creativity, positively and successfully affected his world, but left without taking away any of the instruments ‘he made and used’ for which he was known as a multi-talented musician. 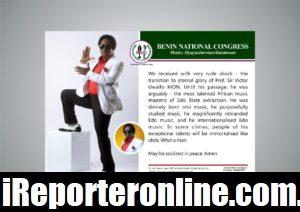 In 1995, Uwaifo was invited by the United Nations Staff Day International Committee to perform during the UN Golden Jubilee celebration. He was cited in the Grove Dictionary of Music and Musicians,1983 edition; documented in the “Who’s Who in Nigeria”, “Who’s Who in Africa”, “Who’s Who in the Commonwealth”, and “Men and Women of Distinction in the Commonwealth”. He was an Honorary Member of the Biographical Advisory Council, Cambridge, England; a member of both the Performing Right Society, and of the Advisory Board of American Heritage University, California, US. He was the first Nigerian to win a gold disc in Africa, (Joromi) released in 1965 at the age of 24 years (Wikipedia.org).

Our Request: we, the members abd trustees of Benin National Congress worldwide humbly make this urgent and earnest request to the Governor of Edo State, His Excellency Godwin Obaseki and President Muhammadu Buhari, GCFR to immortalise our illustrious Prof Sir Victor Efosa Uwaifo, MON, JP. The honours will further encourage our youths to strive to achieve excellence in their endeavours and to bring international honours to our Land through arts and culture—the shaping and promotion of which Sir Victor Uwaifo epitomised.

Adieu, the talented and phenomenal Legend!