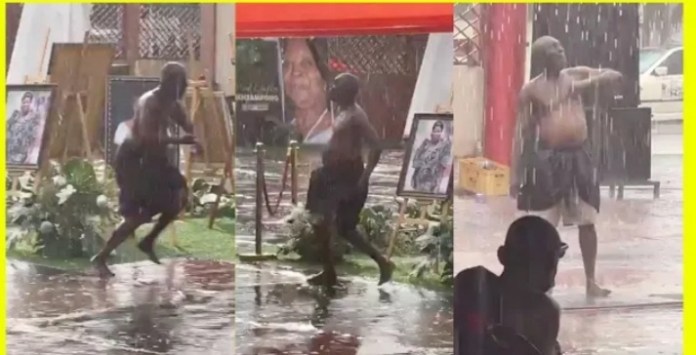 Shocking as a Ghanaian man commands rain to stop at a funeral in a new viral video.

A yet to be identified Ghanaian spiritual man became the hero of the day after heavy rainfall tried to halt and totally destroy the funeral ceremony of a loved one festival after.

This video has received huge engagements from Ghanaians as it serves as proof that culture is not all that barbaric as the Whiteman has brainwashed us to believe so.

In this fast trending video, the highly spiritual man can be seen dancing to the rhythm of the traditional drum whiles pleading with the Gods to kindly stop the rains so that funeral of his beloved can go on as planned without difficulties.

After the chants, dancing and jumping for a little over 10 minutes, the rains stopped and the funeral rites which was initially put on hold was re-started.

There’s so much power in our culture and customs if only we will preserve and hold them high in esteem.

See Video Via The Link Below;