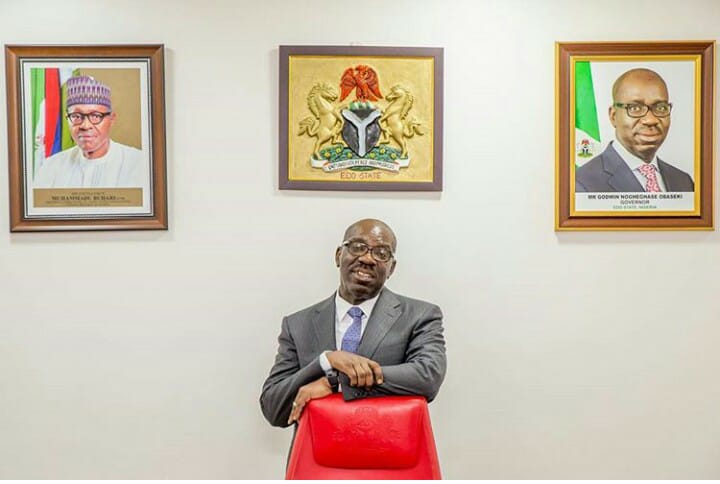 100 Days In Office: Why No PDP Is Holding Any Position In Edo State As Obaseki Emerges The Last Man Standing.

Yesterday while doing a routine check on platforms on the latest trending gist to report on Edo State I stumbled on a post where a respondent said Obaseki seems to be running the State like a Rolls-Royce engine without EXCOs. He called it political innovation.

The statement was in direct response to a complaint that Obaseki’s first 100 days in office there is no single executive, local government chairmen and political aides.

After all the political bickering back and forth one fact seems to be irrefutable, which is Obaseki has emerged as the last man standing.

I have said it times and over again that Obaseki’s mindset is more of the technocratic bureaucrat who weighs the economical value of POLITICS.

I personally have since given it to Obaseki for his deft anti-political moves which always works like magic for him.

Edo State people are the typical Nigerians that are egoistic and really do not want too much shine from an individual for a stretch of time, Obaseki is a good student of listening to the pulse of the local people.

Edo people did not bother to vote on whether the government is working or not, they clearly stated that they voted against the political OLIGARCHY.

And they had their way because the politicians were lazy and unfortunately out of tune with the people, with a little bit of more mobilization the political class would have dethroned Obaseki. But like earlier stated they went to sleep forgetting that hard work pays.

Anyway, that is a stale gist, away from Obaseki’s performance or magic is left for respondents to analyze. My point today is strictly my opinion and like my usual self, I would state it the way I see it.

Yes, Obaseki has emerged as the last man standing, for PDP members complaining they should have learnt from the experiences of APC. Obaseki first-ever platform to prominence was the APC, they should go and look at how Obaseki treated the APC in terms of appointment.

The driver that teaches the madam how to drive runs the risk of losing his job when she completes her driving lessons.

Obaseki would remain the Governor even if he no longer belongs to a political party. In other words, Obaseki really does not need a political platform to shine, even if Obaseki comes out openly to say he belongs to no political party he would still be applauded by his supporters.

Then for the local government chairmen, have you not noticed nobody is campaigning anymore? The Governor has made it clear that a substantial part of his second tenure would be handled by civil servants.

Those complaining that Obaseki has no State Executives let me shock you, Obaseki reshuffled his whole personal and domestic aides, the drivers, cooks, PA’s, security details etc were alleged to have been changed in his second coming.

Shey, I can hear you say thank God they have benefitted a lot for so long? That is the spirit, people would always applaud whatever decision the Governor makes.

Rolls-Royce engine without EXCOs nice word to describe the Governor. Obaseki first three years never saw much changes to the polity, the roads which were used in campaigning were not even available then, the thousands of aides employed were not in the picture in his first three years. Everything changed just 16 months to the elections.

A game of weighing the political ECONOMICAL value of running the game with politicians. The PDP should quit complaining as they risk the anger of the people if they persist with their cries of neglect.

The next 6 months would probably not witness any spectacular changes, it is my advice that the proponents of both parties should focus their attention on more meaningful things that would improve the lives of the citizens of the State.

Lastly for those praise singers let me buttress the implications of having the last man standing. Competency in agencies would be at its lowest ebb because of a lack of motivation and attention.

Today we are gradually watching with our own eyes how thuggery and Agberoism are gradually taking over the State, this is so because nobody would want to take responsibilities like before when things go bad, unit heads that ought to wade in would say the last man standing should go and do it himself.

When we had local government chairmen some parts of the State were already “SUNK” in filth, one wonders what would happen in the coming months.

However, a time would come when Obaseki would reinvigorate all these political appointments, it could be next year on in 2023 but be sure that things would always come back to normal, just take a break and let the Governor go to work.

Buhari Commends Uzodimma For Constructing 46 Roads In One Year