A notorious bandit, Jabiru Muhammed says a traditional leader, Mai Unguwa Zailani and two other persons are his accomplices in perpetrating banditry attack in the Tsafe Local Government Area (LGA) of Zamfara State. 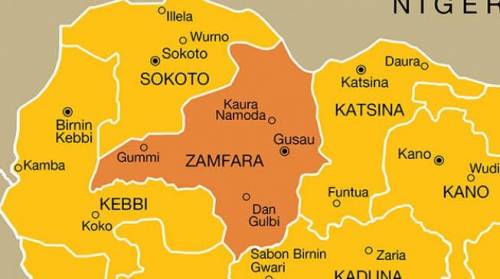 Muhammed alleged that he works under the command of a notorious bandit he simply identified as “Chairman,” said to be hiding in Zamfara forest.

According to a statement by the Katsina State Police Command, the suspect revealed that he participated in an attack on Saburu village in the Tsafe Local Government Area, where they kidnapped four children and were paid a ransom of N2 million.

He also revealed how they broke into shops in Ungwar Dodo village in the same council area, carting away foodstuffs among other items.

“In the course of investigation, the suspect confessed to be under the control of one Chairman, a notorious bandit hibernating in Zamfara forest. He further confessed to have participated in the attack of Saburu village, Tsafe LGA of Zamfara State where four children were kidnapped and the sum of two million Naira (N2,000,000) was paid as ransom and also in the attacks on Unguwar Dodo village, of Tsafe LGA of Zamfara State where shops were broken and food items and other items were stolen.

“He mentioned the Ward Head, one Mai Unguwa Zailani, Abdulkadir Kado and Bala Sani among his accomplices. Investigation is ongoing.”

JUST IN: Former President In Serious Trouble Over Campaign Financing