Caitlyn Jenner has filed paperwork to run for governor of California as Gavin Newsom faces a possible recall over his response to the COVID-19 pandemic.

On Friday, April 23, the former “Keeping Up With the Kardashians” reality TV star and Olympic gold medalist released a statement saying she had filed the initial paperwork needed for the run.

“I’m in!” Jenner tweeted along with a link to her campaign website.

“This isn’t the California we know. This is Gavin Newsom’s California, where he orders us to stay home but goes out to dinner with his lobbyist friends,” Jenner said in a statement, referring to Newsom’s pandemic visit to the posh eatery French Laundry.

“California has been my home for nearly 50 years. I came here because I knew that anyone, regardless of their background or station in life, could turn their dreams into reality. But for the past decade, we have seen the glimmer of the Golden State reduced by a one-party rule that places politics over progress and special interests over people. Sacramento needs an honest leader with a clear vision.”

“An entire generation of children have lost a year of education and have been prevented from going back to school, participating in activities, or socializing with their friends,” Jenner wrote. 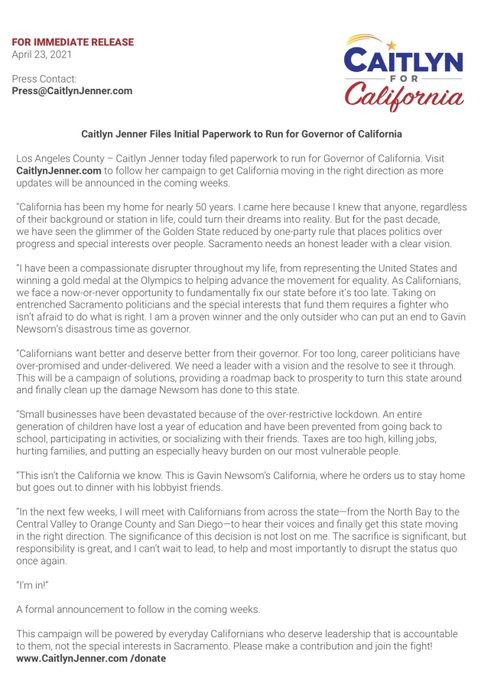 The Republican is being backed by a campaign team that includes Trump campaign veterans, including pollster Tony Fabrizio, the former president’s pollster, according to Axios.

Trump’s former campaign manager Brad Parscale, a personal friend of Jenner’s, has helped her assemble her team but doesn’t plan to take an official title on the campaign.

Hope You Enjoyed The View Mummy? Would You Like To See My Pu$$y Too?” – Singer Temmie