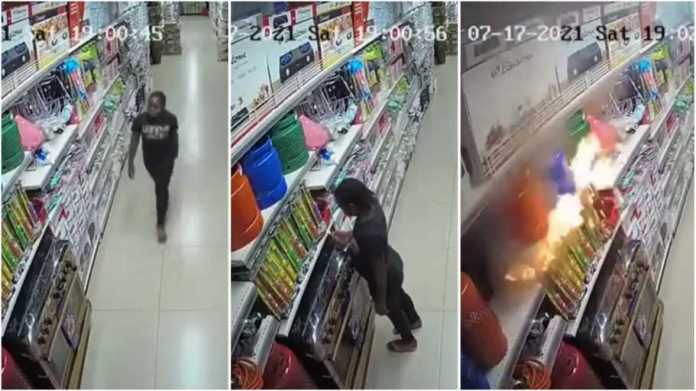 CCTV footage showing what caused the fire outbreak at a popular supermarket a week ago has surfaced online.

Recall that residents on Saturday, July 17, woke up to a popular supermarket located at Lokogoma district in Abuja razed down by the fire.

According to reports, it was a battle by the firemen to get the inferno under control as it lasted until the next day.

It was reported that goods worth millions of naira were destroyed in the inferno.

In a latest development, it has been revealed that the fire was no accident, but a deliberate attempt by an unidentified young woman.

The surveillance video captured the moment the woman sneaked into one of the rows and sparked a match into the items.

She could be seen looking around before setting the fire in items believed to be inflammable including mini cylinders.

After her deed, she quietly walked away, leaving the fire to spread across.