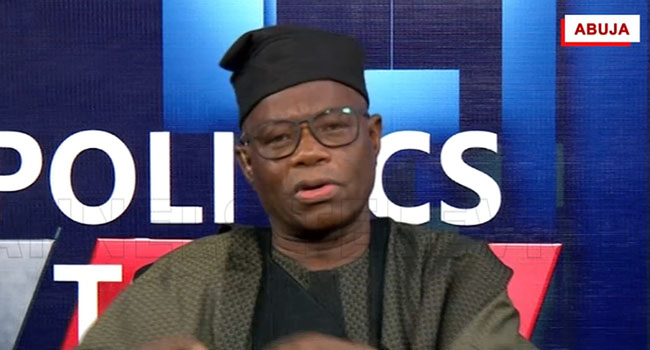 Senator Kola Balogun has called on the Federal Government to grant the South West Security Network codenamed Amotekun the license to bear arms.

The lawmaker who represents Oyo South Senatorial District made the call on Monday when he featured as a guest on Channels Television’s Politics Today.

“Let me also say that I am aware that the Amotekun personnel have requested that the Inspector-General of Police grant them the license to be well-equipped. As we speak now, they are not as equipped as these invaders who are savages and who go on the rampage,” Senator Balogun explained.

“I appeal to the IG and the police to grant them (Amotekun personnel) the license to be well-equipped as long as what they are doing is in support of what the police is doing.”

Clashes between herders and farmers in the southwest have made front pages in recent months, raising concerns over the ability of security agencies to maintain law and order.

Over the weekend, gunmen attacked the Igangan community in Oyo State, killing 11 people and destroying properties.

But the lawmaker while condemning the incident, lauded the Amotekun operatives and other local vigilante groups, explaining that the situation could have been worse if not for their intervention.

“Amotekun is active and Amotekun is working even with the police. As a matter of fact, the situation would have been worse but for Amotekun and other local security outfits because from the report that I got, the people that came to invade had bigger plans than what happened,” he added while noting that Amotekun now has a joint patrol across the region.

“It was the community, the Amotekun, the local vigilantes that were mobilised in the middle of the night even though they were ambushed because they were not expecting them but they actually mitigated the effect of the damage.”

Ibarapa has been under the spotlight recently over clashes erupting intermittently between farmers and herders, resulting in deaths and injuries.

Ethnic tensions are not uncommon in Nigeria where more than 250 ethnic and linguistic groups live side by side.

Clashes erupted in nearby Ibadan, the Oyo state capital, back in February, between a group of Yoruba who dominate the region and traders from the Hausa community, who mainly hail from Nigeria’s north.

Southern states have seen a surge in intercommunity tensions in recent months over northern Fulani herders who move south for grazing cattle, often putting them in conflict with local farmers.

Fiery rhetoric from some southern officials blaming northern Fulani for a surge in crime and kidnappings in their regions has stoked tensions.

President Muhammadu Buhari has previously warned against using ethnicity for political leverage, but some regional leaders accuse him of not acting decisively because he is himself an ethnic Fulani.