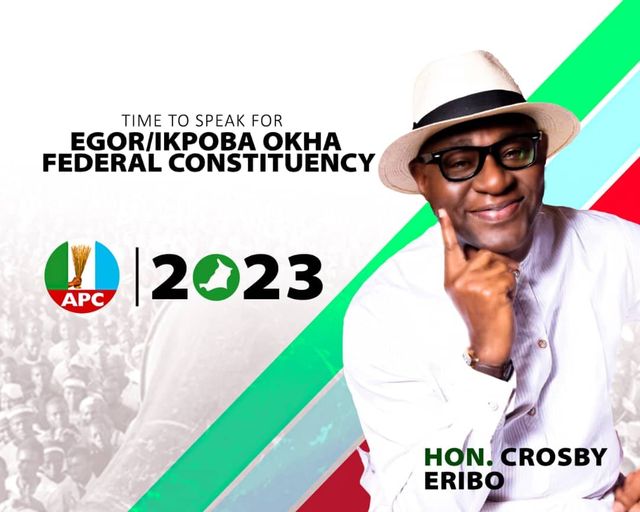 Hon Crosby Osadolor Eribo: A Veteran Takes the Stake to the National Level

It was the American Political Thinker James Freeman Clarke that said: 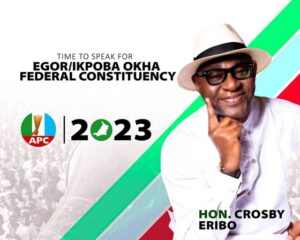 Hon. Crosby Osadolor Eribo (JP), three-time Chairman of Egor Local Government Area of Edo State of Nigeria, has the uniqueness of being the first Local Government Chairman in Nigeria, whose Local Government election case got to the Supreme Court, for which he acquired the exclusive sobriquet- Supreme. Honourable Crosby Osadolor Eribo (JP) is now poised to take his people’s representation to the Federal Level, as he contests for the Primaries of the House of Representatives in the Egor Ikpoba-Okha Federal Constituency, under the auspices of the All Progressives Congress.

It was John Quincy Adams, the 6th President of the United States that said:

If your actions inspire others to dream more, learn more, do more, and become more, you are a leader Hon. Crosby Osadolor Eribo, who is a development enthusiast, has endeared himself to his people through his accessibility, generosity, and humanity, which is depicted in his benevolence to all that comes his way, irrespective of tribe, status, religion, or creed.

The Member elected to represent the people of Egor Constituency in the Edo State House of Assembly has extended his democratic credentials, by refusing to be enticed by the spoils of Office to be part of the shenanigans of the Minority ruling over the Majority, which is the spectacle that is playing out in the House. Rather he has chosen to follow due process, asking that the proper thing be done in the Inauguration of the House. He has by dint of his action earned himself another accolade, to wit: the champion of democracy

Honourable Crosby Osadolor Eribo (JP), a scion of the aristocratic Eribo Family, that are purveyors of the Popular Edo Textile Mills, in Benin City, has cut his teeth in the Edo Political milieu, first by being a three-time Chairman of the Egor Local Government Area of Edo State. Next, by serving under 3 Governors, for which he was credited with many developmental strides and also for being a Member of the Edo State House Assembly in his first term, representing the People of Egor and in which Office he served as the Chairman of the House Committee of Public accounts, where he distinguished himself by ensuring accountability of Public Entities. He was elected a second time and we all know what the politics are, but despite this, Hon. Crosby Eribo has remained steadfast to his people and focused on his objectives.

The personality of Honourable Crosby Osadolor Eribo (JP) is encapsulated in the immortal words of Jim Roh, thus:

The challenge of leadership is to be strong, but not rude; be kind, but not weak; be bold, but not bully; be thoughtful, but not lazy; be humble, but not timid; be proud, but not arrogant; have humour, but without folly

Honourable Crosby Osadolor Eribo is a top contender for a seat at the Federal House of Representatives seeking to represent the Egor/ Ikpoba-Okha Federal Constituency as he brings to bear his deep understanding of the issues concerning the Federal Constituency just as he also possesses the requisite character to ensure that the right things are done.

Hon. Crosby Eribo has imprinted his footprints in the sands of time because of his fine representation of his people and his generosity to them, which holds no bounds. He gives, not because of politics, he gives because it is in his nature to give. It was Margaret Thatcher the former British Prime Minister that said The good Samaritan was known not just because he was good, he was known because he also had money. Honourable Crosby Osadolor Eribo has been a successful Business Man, with interests in diverse strata of the Economy and due to his spartan nature, he is quiet about his business activities

The Good People of Egor/ Ikpoba-Okha Federal Constituency, we present to you, Hon. Crosby Osadolor Eribo (JP), for representation for progress and development. A man that means what he says and says what he means.

About the Author:
Douglas Ogbankwa Esq., @[email protected], is a Benin Based Lawyer, Writer, and Policy Analyst, who is the President of the Benin Writers’ Society.