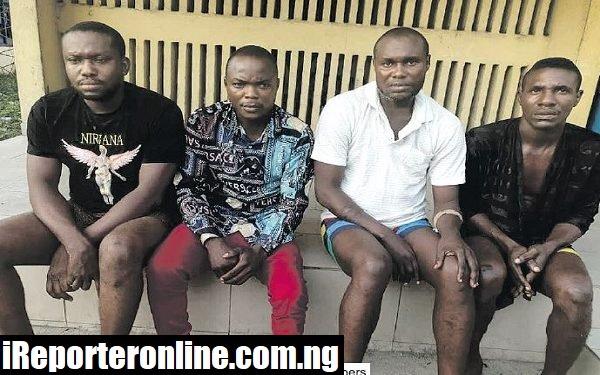 Five suspected members of a notorious kidnapping gang allegedly responsible for the recent abduction of three managers of Zenith Bank PLC in Delta State have been arrested by operatives of the Force Intelligence Response Team (IRT).

The arrested suspects, who gang was said to have received a ransom of more than N50 million in foreign currencies, include Owes Okpaka, Lawrence Kevwe Egagah, Victor Dominic, Usobotie Sylvester and Alex Okoun.

A source said they were arrested after operatives of the IRT got information about their activities from one of their victims, Daniel Imani, the manager of the Warri Urobo College Branch of Zenith Bank, who was abducted on his way home by members of the gang on October 5, 2020 and a ransom of N15 million was eventually paid for his release.

The source further disclosed that after Imani was kidnapped and released, members of the gang  went on to kidnap  two other managers of the bank, identified simply as Mrs. Zowa, a manager of the Ogonu Warri branch, and one Mrs Isioma, the manager of the Effurun branch.

A total sum of N35 million was said to have been paid to the kidnappers as ransom in foreign currencies before the two victims were released.

Operatives of the IRT who swung into action after Imani’s complaint were said to have discovered that the kidnapping of the bank managers was masterminded by Okpaka, an employee of the bank.

Okpaka, a driver with the bank in Delta State, allegedly gave information about his senior colleagues, who he knew could afford huge sums as ransoms.

He was also alleged to have trailed his victims to their homes and gave out information about their movements to members of his gang.

For his efforts, he got a total sum of N15 million as his share of the ransom.

Upon his arrest, however, he made confessions that aided the arrest of four other members of the gang, including an ex-militant who had taken part in several bank robberies and vandalisation of oil pipelines.

In his confessional statement, Okpaka said: “I am a native of Ubogo community in Udu Local Government Area of Delta State. I am a graduate of  Oghara Polytechnic, Delta State.

“I was working at the Ogonu branch of Zenith Bank as a driver until I resigned from the job in January this year. I was arrested because I masterminded the kidnapping of three of colleagues.

“My gang members include Victor and Kevwe, but I do not know the names of the remaining ones. I was the person that brought the three kidnapping jobs involving Zenith Bank staffs.

“The first person we kidnapped was one Daniel. I was the person that monitored his movements and gave out his location to my gang members. Daniel is the Zenith Bank manager for the Urobo College Branch in Warri, and we kidnapped him sometime in October, 2020. I do not know the type of gun that was used for his kidnapping.

“He was kept in our custody for one week, but I do not know who negotiated the ransom. I also do not know how much was paid as ransom. But the ransom was paid in dollars and my own share was also given to me in dollars. When I converted it to naira, it was N2.5 million.

The second kidnapping was that of a woman called Mrs. Zowa, a staff of Zenith Bank at the Ogonu Branch, Warri.  I was the one that gave out information about the woman to my gang members.

“I cannot remember the exact month that we kidnapped her, but it was Victor and I  that planned the operation.

“Victor also brought two other boys for the job and we kidnapped the woman along PTI Junction, Warri.

“Victor was the one who negotiated the ransom I do not know the exact amount that was paid, but the money came in dollars.  I also got the sum of N2.5 million as my own share.

“The woman was kept in our custody for one week before her ransom was paid.

“The third kidnapping that I carried out with my gang members was that of Mrs. Isioma, also a manager of Zenith Bank, Effurun Branch.

“I was also the one that arranged her kidnapping while Victor kept her in his house. But I was part of the ransom negotiation.

“We agreed on N20 million and I got N10 million as my share. I use my Toyota Corolla car to go and pick up the ransom. It was the last kidnapping I did before I was arrested.”

Narrating his role, Victor Dominic Ovo, a native of Oghara,  Sapelle Local Government Area, Delta State, said: “I was arrested in my house at Oghara. I did not know why I was arrested until I got to the police station.

The reason the police arrested me was my involvement in kidnapping. We are five in our gang. We used one pump action gun loaded with live cartridges and one  AK47 riffle loaded with one magazine containing 10 -15 live ammunition. We also used a black Mercedes C-Class with glass and another Mercedes E-Class car. The cars belong to Kevwe and I.

“My kidnapping gang members include Owes, Kevwe, Chuks, Didi and Lucky. We have a member, Owes, who usually brought the jobs.

“I was involved in three different kidnapping cases between October 2020 and February 2021.

“The first operation was in October, 2020 when we kidnapped a man that Owes gave us information about.

“On our way back after kidnapping the man, Kevwe ordered us to come down from the vehicle so he could take the victim to his camp. But it was Kewve and I that negotiated for the ransom.

“We bought a small phone and used our victim’s SIM card on the new phone for the negotiations. After much negotiation, the victim’s family paid us the sum of N15 million in dollars. It was Kevwe and I that went to pick up the ransom. I got N1.6 mllion as my own share of the ransom.

“The second kidnapping job that Owes brought was a woman. After we kidnapped her, I took her to my house at Oghara and called her people for ransom negotiations. The sum of N15 million was agreed, to be paid in dollars.

But after we received the money in dollars, we discovered that it was actually N12 million that was paid.

“It was Owes and I that negotiated the ransom, and we were also the ones that collected the ransom. We used Owes’ Corolla car and I got N1.6 million.

“I use part of the ransoms I collected from kidnapping to pay debts.

“Apart from kidnapping, I have also been involved in armed robbery in Ondo and other Southwest states. It was Kevwe and one Monday, who is now late, that usually organised the robbery operations.

“We usually arm ourselves with guns and cutlasses, and our targets are motorists.

“I have gone for several robbery operations, and at the time I was arrested, some live ammunition was recovered in my house.

“I am also into cyber crime. I am aware that kidnapping is a serious offence.”

On his part, Lawrence Kevwe Egagah, a native of Ekrami community in Ughelli North Local Government Area of Delta State, said he was shot in the leg when he tried to escape when the police came for him.

Egagah said: “I was arrested on March, 11, 2021in my house at Agbaro area of Delta State.  When the policemen came, they introduced themselves as police officers. I got shot when I tried to escape and I was taken to the hospital.

“I knew why the police came looking for me. I took part in the bank managers’ kidnapping, and my friend, Owes, who I have known in the last 10 years as a bank driver, brought the jobs.

“He was the person that sold the idea to me. He said his bosses could pay us up to N10 million if we kidnapped them.

“We called one Victor a.k.a Papa and informed him about the plans. Victor accepted and brought two of his friends, making us five in number.

“We used my E-class Mercedes Benz car and Victor’s red coloured Jetta car for the operations.

“I later called one of my friends known as Sylvester and requested for his rifles. Sylvester directed me to Emmanuel who gave me one AK47 rifle and a pump-action gun, which we used for the operations.

“After I brought the guns, Victor took them into my Mercedes Benz, with the two boys that he brought. After a while, Victor brought our target, Mr. Daniel, into my vehicle blindfolded and I took our victim to my house at Agbaro area, where I kept him at the passage for four days.

Bandits kill 8, behead one, at mining site in Plateau