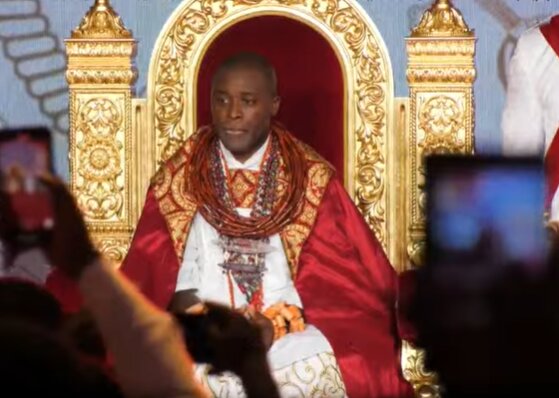 The Olu of Warri, Ogiame Atuwatse III, on Saturday reversed an ancestral curse placed on Nigeria by his grandfather, Olu Erejuwa II, over injustice meted out to him by the federal government.

He made the reversal in his first proclamation at the weekend during his coronation as the 21st ruler of the Warri Kingdom in Delta State, replacing the curse with forgiveness and healing.

“As the spiritual, cultural, political, and traditional ruler of this land, I, Ogiame Atuwatse III, the 21st Olu of Warri, the first son of Olu Atuwatse II, the grandson of and direct descendant of Olu Erediuwa II who was offended on this throne, hereby, reverse the curse placed over this land.

“In its (the curse’s) place, I release forgiveness and healing to the Federal Government of Nigeria whose might was used to propagate that offence, and I decree unprecedented and an uncommon peace, prosperity, progress, development upon this land,” the newly-installed traditional ruler declared.

Atuwatse III explained that the late Olu of Warri was so pained over the undisclosed offence that he visited late Akenzua II who was Oba of Benin between 1933 and 1978 to recount his ordeal.

The two traditional leaders were then said to have placed a curse on the land and the issue has yet to be revisited since then.

Atuwatse III, who described himself as a firm believer in the intricate connection between the spiritual and the physical, told all who were present at his coronation of the need to address the issue.

He went on to pray, “I bring down the government of heaven unto this land and I direct it to flow as a course that can neither be sabotaged, slowed, nor stopped.

READ ALSO: See Photos And Videos From Coronation Of Olu Of Warri,Tshola Emiko

Here Is A Detailed Profile Of The Newly Crowned Olu Of Warri, Ogiame Atuwatse III

Check Out The Tight Guest List For Rachel Oniga’s Burial