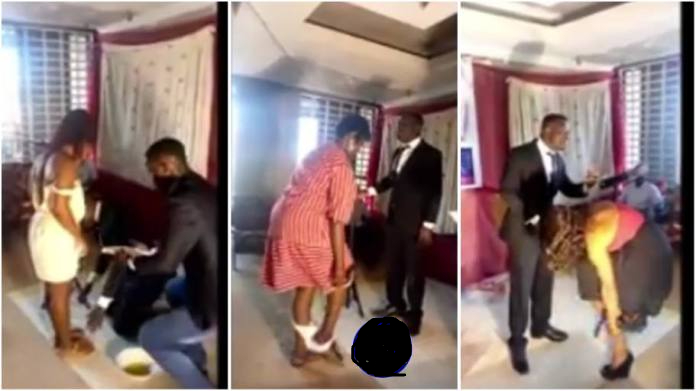 Wonders will never end, as a pastor was seen shaving and sniffing female members cooking pot during church service.

Some brainwashed congregants who can’t use their heads to reason were caught on camera going to him in turns as they took off their pants for him to do the ritual.

The source prying eyes caught a banner in the church which reads in parts: “3-Day Supernatural Cleansing”

In the video, he informed the ladies that when it gets to their turn to approach him, they should remove their own pant.

While shaving, another man, perhaps a junior pastor, is seen with a white handkerchief collecting the pubic hair even before they fall to the ground.

The pastor was so angry as he shaved the ladies, complaining that some people have been questioning and ridiculing his spiritual directions.

He said those who say he is not from God are foolish and asked “If I am not from God, am I from your mother?”

“At the time God called me were you there? What kind of foolishness is that? he blurted angrily.