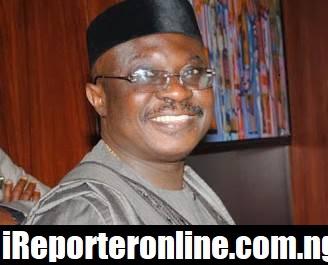 PDP Vs Obaseki: PDP Fires At Mike Ogiadomhe Describes Him As A Chief With Bogus Titles Not Capable Of Being A leader

We knew it would come to this, from the trajectory of the responses PDP so far has ditched out then we expected nothing less. It started with the first salvo at High Chief Tom Ikimi whom they described as an expensive old man clinging on to Obaseki for political patronage.

Then next was a direct attack at High Chief Raymond Dokpesi who they referred to as a receiver of a GREEK GIFT by Obaseki.

Recall we told you earlier today that we were anticipating the response for another High Chief whom the PDP mentioned as among the masterminders behind the plot to dissolve the State Working Committee of the PDP.

The much-anticipated response to High Chief Mike Oghiadomhe is finally out and again it was a banger.

It was indeed another round of lectures for the former Deputy Governor of Edo State. The PDP descended on him so badly, questioning his multiple chieftaincy titles, they even queried his leadership capacity.

“If we may ask, what makes Chief Ogiadomhe so vehemently proclaim himself a leader? Is it his age as a party man or his Leadership ability which we all know he totally lacks?

Habamana, the PDP’s back to back hit on their leaders has been more than hilarious.

Like we always say we are here to entertain you guys on trending political gist and gossips.

See the full unedited response below as seen on Social Media.

Re: PDP Consultative Meeting Held 12th Of May, 2021, In Government House, Benin City.

It is with amusement and a shake of the head that we read Chief Mike Ogiadome’s rather tepid response on the above subject sent out on his behalf by a faceless “Media Team” whilst skirting the real issues in his vane attempt to hoodwink discerning party Loyalists and trying to be clever by half!
It was very amusing to see his team reel out all his past official titles that collectively added no value to the human & physical development of his people.

Let us without further delay point out the following:
(1). Ogiadomhe’s response only pointed to the fact that Chief Dan Osi Orbih was invited but did not state if he (Chief Dan Osi Orbih) was in attendance at that meeting with the Governor. This is a clear attempt at deceit. Something that comes very easily to him.
For the record, Chief Dan Orbih was not in attendance because, whereas others received their invites three days ahead of time, his was received eight hours to the meeting. He therefore could not attend because of logistics challenges.

(2). He stated in Paragraph 6 of his response that,” the Governor has every right and privilege to convene a meeting in the manner he deems appropriate”.

We do not dispute this but it has to be in alliance with the Party Secretariat. This was not the pattern followed which gives room for suspicion of intent. It was even more laughable that he, like his co-travellers, claim not to know the meeting agenda. With all his mega titles one would have expected him to have demanded to know that. We understand though that blind envy would not make him think straight.

(3). In Paragraph 7, he went further to make the most ambiguous allegation that certain individuals who have grown within the party are bent on advancing personal greed by curtailing the influence of leaders.

If we may ask, what makes Chief Ogiadomhe so vehemently proclaim himself a leader? Is it his age as a party man or his Leadership ability which we all know he totally lacks? What people capacity building structures did he foster and nurture even in his Unit & Ward Levels? Little wonder therefore such a “Super Leader” keeps falling short in delivering electorally for a political party he struts around claiming “Leader”. Chief Ogiadomeh should be tutored to know that leadership is Influence not title!
Leaders are chosen by their people to lead them because of certain qualities inherent in them. One being oneness with the people. Chief Mike Ogiadomeh is not at sync with his people. He is selfish and arrogant. He is not a “Peoples Person”

(4). His request for the publication of election results of his unit right from the inception of the party to us is at best a callous attempt at dressing the political injuries inflicted on him when he lost his polling unit in the September 19,2020 Governorship Election and only a defeatist attitude to cover his shame.

People of far less stature win their polling units, yet our Chief Ogiadomhe wants us to applaud him for failing us woefully in his Unit and Ward.

We wish to state for the avoidance of doubt that it was Chief Ogiadomhe and his co-travellers of defunct and ineffective political carpetbaggers that nocturnally cocooned themselves in the Government House to perpetuate and force illegality on the party like members of a secret cult. The Governor is best advised to distance himself from these “has beens” as they lack the political clout and goodwill to effect ANY promise or resolution they reach. He should by now see that from their many failed attempts.

(5). He stated in the last Paragraph that politics is about discussions and negotiations. This indeed is the only ground we agree with him, but would also promptly admonish him to note that such discussions and negotiations are not criminally intentioned solely to undo the same party executives while festering the political nest of his family such as pushing for his son to be appointed Commissioner. A son unknown in the political terrain. One that has not given anything to the party. Not even physical presence at political rallies or events.

Chief Ogiadomhe and his co-travellers went to that meeting as a body with the sole aim of craftily and greedily arrogating to themselves that which the party constitution does not accord them.

Chief Ogiadomhe is best advised to go back to his people, beg for forgiveness and just maybe they will begin to accord him relevance just as they do Chief Dan Orbih because of his selflessness and magnanimity even as a private citizen who does not carry those empty titles Chief Mike Ogiadomeh is weighing himself down with.

Customs Neutralises Smugglers During Botched Abduction Of Officer In Oyo