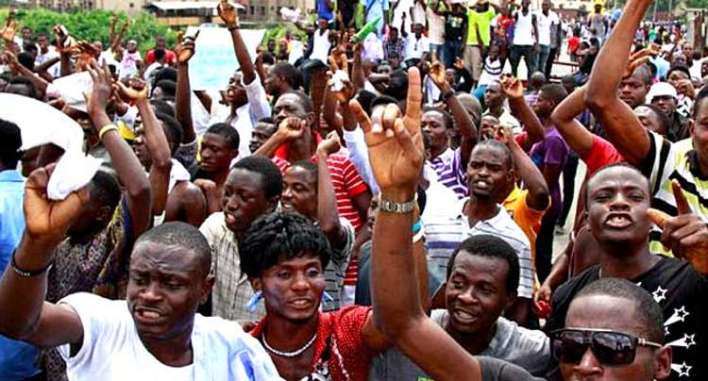 The face-off between Edo State Governor,  Godwin Obaseki, and the Oba of Benin, His Royal Majesty, Omo N’ Oba N’ Edo Uku Akpolokpolo, Oba Ewuare II, yesterday degenerated into a massive protest by members of the Association of Okaigheles (youth leaders) in Benin Kingdom, over the law recently put in place by Obaseki’s administration proscribing their existence.

The protest led to gridlock at the popular King’s Sqaure (Ring Road), Benin, the state capital, near the palace of the first-class monarch, and other link roads, with pedestrians, commuters and motorists groaning for hours.

The protesters were armed with banners and placards bearing various inscriptions.

Some of the inscriptions included: “We are proud of our King”, “Governor Obaseki, you are not our spiritual father”, “We are Okaigheles to the Palace of Oba of Benin, not Government House, Benin City”, and “Arrest and persecute any Okaighele that’s involved in illegality.”

As the protesters were leaving Ring Road, they headed for the expansive palace of the Oba of Benin, in order to let him know of their grievances, while terminating the protest at the Press Centre of the Nigeria Union of Journalists, Edo Council, at the Government Reservation Area (GRA), Benin, where they addressed reporters.

Okaigheles in Benin are youth leaders in communities in charge of land purchase and sale of landed property in Benin Kingdom.

READ ALSO: Hushpuppi to be sentenced in October –US Court

The Chairman of the association of Okaigheles, Glory Ikponmwosa, while speaking with reporters at NUJ Press Centre, declared that Okaigheles of Benin Kingdom were not political appointees, while they remained loyal and subjected to only the Benin royal stool.

He said on behalf of the other youth leaders: “We are not politicians and we should not be treated as such, because we are ready to resist any attempt to reduce our rights as traditional citizens of Benin Kingdom by anyone or group of persons, no matter who or what is involved.

“We are natives of Benin Kingdom and we cannot be intimidated or oppressed, under any guise. Okaighele is an age-long traditional position under the Benin native laws and customs, which are over 400 years old, not recent creations.”

“Edo State government and Obaseki’s administration do not have business or rights to ban Okaigheles to operate in Benin Kingdom, under the Benin Traditional Council law of Edo State.

“Under the Benin Traditional Council settings, communities have leadership structures, which comprise the Odionwere, the Oven, the Okaigheles, and the Enogies.”