The crisis rocking Edo State PDP may not stop anytime soon as the battle of wits between the superpowers in the PDP has just begun. According to reports and complaints reaching our news desk, the State Governor, H.E Godwin Obaseki is set to crush all the Titans in the PDP prior to his entrance into the PDP fold.

It came as a rude shock to PDP adherents in the State when an announcement was made suspending the two-time reps member representing Oredo Federal Constituency in the National Assembly , Rt Hon Omoregie Ogbedie-Ihama and some other PDP chieftains citing anti-party activities.

Rt Hon Ogbeide-Ihama happens to be amongst the few PDP members across the Nation that have never contemplated dumping the party since 1999, that alone is a political feat in this present era of Boju Boju politics.

Speaking to our reporters with confidence but under anonymity, a strong PDP chieftain has narrated why the Governor is after the political structure of Ogbeide-Ihama. 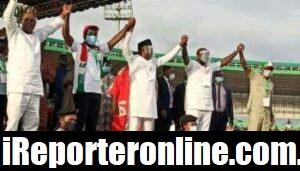 Here is an unedited transcript of the complaints as revealed by the PDP chieftain.

” Now we know why the Governor settled for the newly appointed Chief of Staff, Osiagbovo Iyoha—To do dirty jobs like settling old political scores. Rt. Hon. Ogbeide-Ihama is the first person to win the Federal House of Rep Oredo constituency back to back. When the Governor was still in the APC and of course Iyoha (the chief of staff to Obaseki) was the APC candidate in the 2019 election. He lost woefully. The humiliating loss of all the wards left a sour taste in the Governor’s political memory.
Their path crossed again, when the Governor joined the PDP and entered the primaries through the back door, he again encountered Rt. Hon. Ogbeide-Ihama grass-root political machinery.

Hence at his re-election, he vowed to crush Ogbeide Ihama’s long-established structure. It is alleged attempts are being made to compromise a newly confirmed top Judicial officer in the state to accomplish their evil plans. A former deputy chief of staff is in the thick of things putting the papers together. ”

The PDP chieftain promised to expose all the behind the scenes between the Governor and Osaigbovo Iyoha in rendering OOI politically impotent.

The big question is this, what anti-party offence is Ogbeide-Ihama accused of?

“Your Contributions to Democracy Stand You Strong”: Ex-Senate President Nnamani to Tinubu