You see the last few days have clearly shown how spectacular the 2023 presidency would turn out to be. If you are from a military background you must be familiar with this terminology, PARADE WILL MOVE FROM SLOW MARCH TO QUICK MARCH BY THE  LEFT…
This is an instruction to begin marching at the Quick March speed with the left foot. In local parlance it means everywhere don cast o, nobody is holding back anymore.

I don’t know how to express myself because of the joy burning in me, fans of Tinubu are now fully energized, the Jagaban is hale and hearty and would soon return to the country and begin consultations.

This article is meant to ginger the millions of Jagaban’s fans worldwide, the truth is finally out. Tinubu went for his knee surgery in London and is fast recuperating after a successful operation. Very soon the DRY talks of Tinubu is badly sick would be a thing of the past just like the way Buhari’s certificate became JUNE 12.

Yesterday the Chairman of the Southern Governors Forum (SGF), Governor Rotimi Akeredolu of Ondo State made a perfect clarification that is worth celebrating, you know say some of us don shout tire say Tinubu no get issue still yet some people no wan believe. You know bad news sticks longer.

Akeredolu in a television interview declared Tinubu as the leader of the South he further said they are waiting for his return to take the critical decision as regards the South’s position towards the 2023 presidential elections. 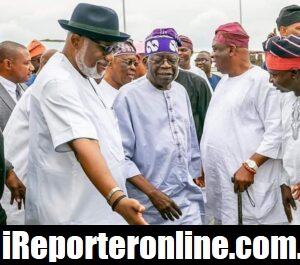 He pleaded to use the STREET word CAPONE for Tinubu. Abeg hear Akeredolu speak,

“So whoever the APC brings, I will support. For the National Leader, we’re waiting for him to come so that critical decision could be taken.
“He is our leader in the South, if I use this word, I don’t know if this is permitted on national television, we can call him our Capone”

According to the Ondo State Governor what prompted his visit to Tinubu alongside his Ekiti State counterpart, Dr Kayode Fayemi was the anxiety about Tinubu’s rumoured ill health that disqualifies him from contesting for the presidency.
He claims he was reassured when they met with Tinubu and confirmed that the Jagaban was as fit as a fiddle.

Even Kayode Fayemi that Tinubu’s political detractors are speculating is at loggerheads with the Jagaban was in London to see the amiable political gladiator. Have you ever seen where an enemy visits another enemy on a sickbed? (he wan kill am?) Tinubu is fine and has no problem with anybody, they alleged that Buhari was not happy with Tinubu and yet he visited the Jagaban also.

Akeredolu has stylishly lifted the lid off for Tinubu’s supporters to begin the parade in QUICK MARCH. I know some people would lash at the Ondo State Governor over the nomenclature used in describing Tinubu by calling him their CAPONE, but sometimes you need to pepper dem abeg.

You see a few days ago Jonathan’s foray into the APC has been interpreted as a stopper to Tinubu’s presidential ambition. A leader does not walk alone, he must be able to sit down with his followers and take far-reaching decisions.

To all Tinubu’s adherents across the world, God no go shame us, our struggles will never be in vain. 2 Corinthians 10:4  says “For the weapons of our warfare are not of the flesh but have divine power to destroy strongholds.”

We shall excel and break the barriers, we believe in the Jagaban and his return would shape the decision of the South as regards the 2023 Presidency.

It is showtime let them bring it on, las las everybody go dey ok. Akeredolu has done the needful by acknowledging Tinubu as the boss of all bosses.

Parade don enter quick march, make everybody enter street begin their campaign for their chosen candidate, no time. For me and my household on Tinubu’s mandate we stand.