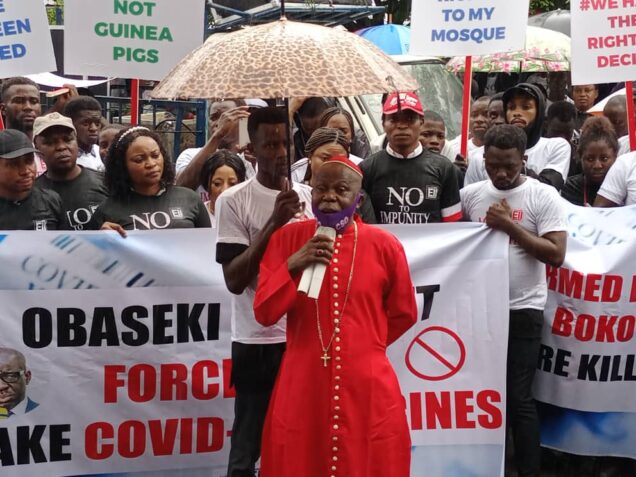 The protesters under the aegis of Equity Initiatives, matched through various streets in Benin, to the Benin branch of the Nigeria Bar Association (NBA), Nigeria Union of Journalists (NUJ) and Edo State Government House.

Obaseki had at a briefing last week named such gathering to include churches, mosques, banks, wedding or burial receptions, among others.

He stated that such gathering would no longer be accessed without presenting the vaccine certificate from the second week of September.

The Governor further stated in the briefing that the third wave of COVID-19, is causing devastating effects across the country, hence the need to introduce stiffer measures to reduce the effect.

Armed with placards with various inscriptions like: ‘Obaseki can’t force us to take COVID-19 vaccines’; ‘I have right to mosque’; ‘We have right to decide,’ amongst others, the peaceful protesters said the government’s order was tantamount to trampling on the fundamental rights of the citizens.

They asked the governor to face infrastructural decay and insecurity in the State.

Chris Iyama who spoke for the groups, said, “We are here to express our displeasure over the government’s move to force Edo people to take COVID-19 vaccines. This is against our fundamental human rights.

“You cannot force someone to eat what he or she doesn’t want. Are we in Banana Republic? We own the state, not the government.”

Also speaking, the Interim State Chairman, Edo Civil Society Organisation, CSO, Bishop Osadolor Anthony Ochei, said citizens of the State have the right to decide whether to be vaccinated or not.

According to him, “If the government has failed, we cannot fail ourselves. Government has the right to make policies but this policy is not law.”