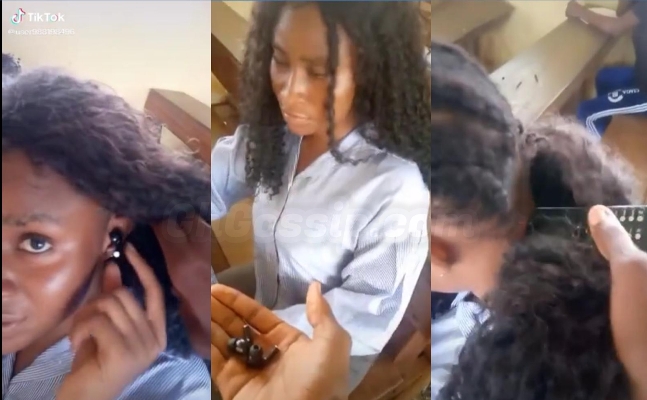 Video going viral on the internet and social media shows how a lady writing her exams was caught communicating with someone outside the examination hall on phone.

Examination malpractice is one thing most educational institutions around the world find very difficult to avoid or prevent students from engaging themselves.

Over the years, many schools have deployed different strategies to tackle examination malpractice but it seems students seem to have been winning the ‘battle’ as they also have been deploying new ways or methods to still cheat in examinations.

In this video, the lady was seen communicating with a friend outside the examination hall with the help of an airpod of which she was using her long hair (wig) to cover it up.

Initially, the lady denied the allegations after the lecturer revealed that he has been monitoring her for a while and he thinks she’s communicating with someone from the outside for help in the examination.

The lecturer then proceeded by lifting her wig sightly and realized the lady was indeed having an aipod in her ear. She denied that she was not having any phone connected to the airpod but after the lecturer lifted the wig off her head, they found the phone hiding at the back of the neck of the lady.