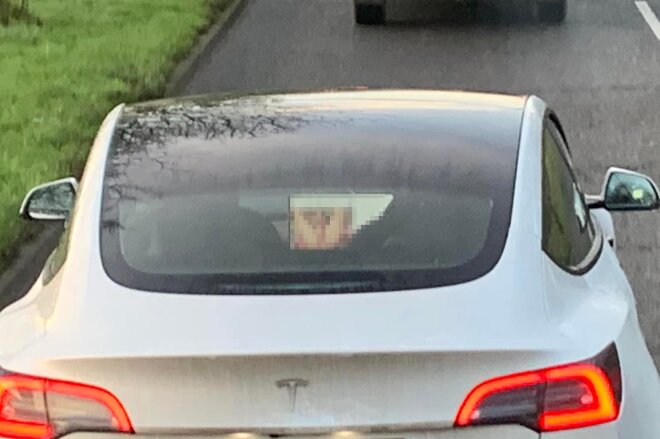 The motorist was snapped with the X-rated scenes on his large console screen in the electric car as other drivers headed about their daily routine in Addington, South London.

Shocked Dan Kitchener was stuck in the traffic jam when he spotted the unusual sight – snapping a photo of the Tesla car and shocking footage inside.

The dad-of-one could spy the naughty scenes on the big screen through the back window of the 70-plate, Tesla Model 3, which is worth around £50,000.

Dan said: “It was slow-moving traffic. It was literally stopping and starting, a maximum of about 5mph in short bursts.

“It appeared at first that the Tesla driver was looking through a catalogue or similar. I briefly thought to myself ‘Well that’s naughty while he’s driving’.

“As we moved along I could see him clicking on images and zooming in and did a double-take and realised he was zooming in on completely naked pictures of women.

“I was absolutely flabbergasted. It appeared to be some kind of website and he was just having a good scroll through. I couldn’t believe it.”

Dan joked: “I didn’t mind being stuck in a bit of slow traffic this morning for once. Sights were marvellous. Just when you thought you had seen it all.”

The Tesla driver was seen looking at the saucy adult clips at around 8.15am last Wednesday, January 12.

It’s illegal to watch any screen while driving that does not contain driving data and police can pull you over if you are suspected of being distracted.

You could be charged with careless or dangerous driving if you are caught being visibly distracted while behind the wheel.

This can mean fines of up to £5,000 as well as up to six points on your licence or an outright driving ban.

Other Reddit users told of how this was a very common thing for truck drivers to do when they are out on the road.

While they don’t condone it, one person said: “I had a relative who was a truck driver and said this type of thing is way more common than you’d think.”

Other motorists also poked fun at the Tesla driver but also urged other drivers to stay safe on the road.

One motorist joked: “Oh no. He’s got a crack in his screen” as another said: “Keep both hands on the wheel.”

One person said: “Auto pilot in full use” as another added: “Alway wondered why you need such a big screen.”