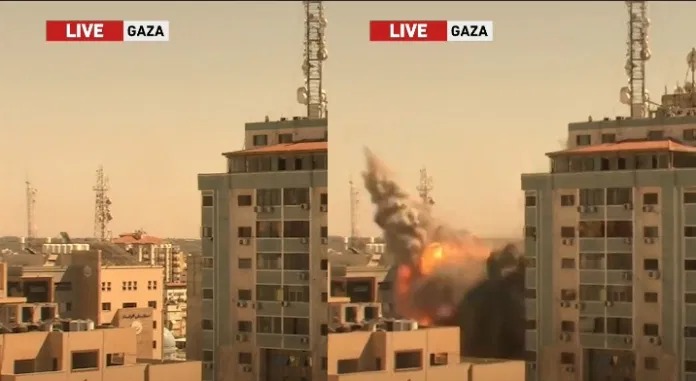 An Israeli airstrike has destroyed a high-rise building housing the offices of Al Jazeera, The Associated Press and other media outlets as the country continues to battle with Hamas militant group in Gaza.

The strike came nearly an hour after the military ordered people to evacuate the building. The strike brought the entire 12-story building down, collapsing with a gigantic cloud of dust.

It also came hours after another Israeli air raid on a densely populated refugee camp in the city killed at least 10 Palestinians from an extended family, mostly children, in the deadliest single strike of the current conflict.

Al-Jazeera, the news network funded by Qatar’s government, broadcast the airstrikes live as the building collapsed.

The tensions began in east Jerusalem earlier this month, with Palestinian protests against the Sheikh Jarrah evictions and Israeli police measures at Al-Aqsa Mosque, a frequent flashpoint located on the mount in the Old City revered by Muslims and Jews.

Hamas fired about 1,300 rockets toward Jerusalem late Monday, in an apparent attempt to present itself as the champion of the protesters.

Israel’s Prime Minister Benjamin Netanyahu has vowed that Hamas would “pay a very heavy price” for its rocket attacks as Israel has massed troops at the frontier. The United States President Joe Biden has expressed support for Israel while saying he hopes to bring the violence under control.

According to Israel, Hamas has fired some 2,000 rockets toward its cities since Monday. Most have been intercepted by anti-missile defenses, but they have brought life to a standstill in southern Israeli cities, caused disruptions at airports, and have set off air raid sirens in Tel Aviv and Jerusalem.

In Gaza, at least 139 people have been killed, including 39 children and 22 women. On the other hand,  in Israel, eight people have died, including a man killed by a rocket that hit Ramat Gan, a suburb of Tel Aviv In Gaza, on Saturday.

The escalation has spread across the region, with Jewish-Arab clashes and rioting in mixed cities of Israel. There were also widespread Palestinian protests Friday in the occupied West Bank, where Israeli forces shot and killed 11 people.

A family of six were reportedly killed in their house by an Israeli airstrike and sent thousands fleeing to UN refugee camps on Friday.

The military said the operation involved 160 warplanes dropping some 80 tons of explosives over the course of 40 minutes and succeeded in destroying a vast tunnel network used by Hamas.

The Israeli military spokesperson Jonathan Conricus said the military aimed to minimise collateral damage in striking military targets, stressing that measures  taken in other strikes, such as warning shots to get civilians to leave, were not ‘feasible this time.’

The military also claimed that the civilian casualties were many in Gaza due to rockets misfired by the militant groups.

The United Nations has continued to call for a cease-fire between the warring parties.

US Diplomat Hady Amr arrived Friday as part of Washington’s efforts to de-escalate the conflict, and the UN Security Council is set to meet Sunday.