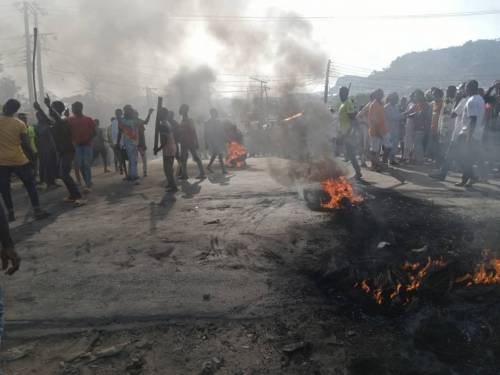 Residents angered by incessant abductions and bandit attacks have blocked the Gauraka Abuja-Kaduna Highway in the Tarfa Local Government Area of Niger State in protest.

The irate youths in their numbers went on a rampage as early as 6:00 am on Monday and barricaded the busy road with bonfire, stones and wood, insisting that nobody will pass until the government addresses the issue of insecurity in the area.

SaharaReporters gathered that kidnappers have been operating in the community on a daily basis and abducted many residents.

The residents are angered that bandits have been picking people up from house to house without any intervention by the security agents in the area.

Despite the presence of the military barracks – Zuma Barracks– in the area the residents said they were helpless and cannot sleep well.

The protesters prevented vehicles from passing on the road.

As at the time of filing this report, there were no security agents on the ground to restore law and order in the area.

The situation has led to heavy traffic congestion.