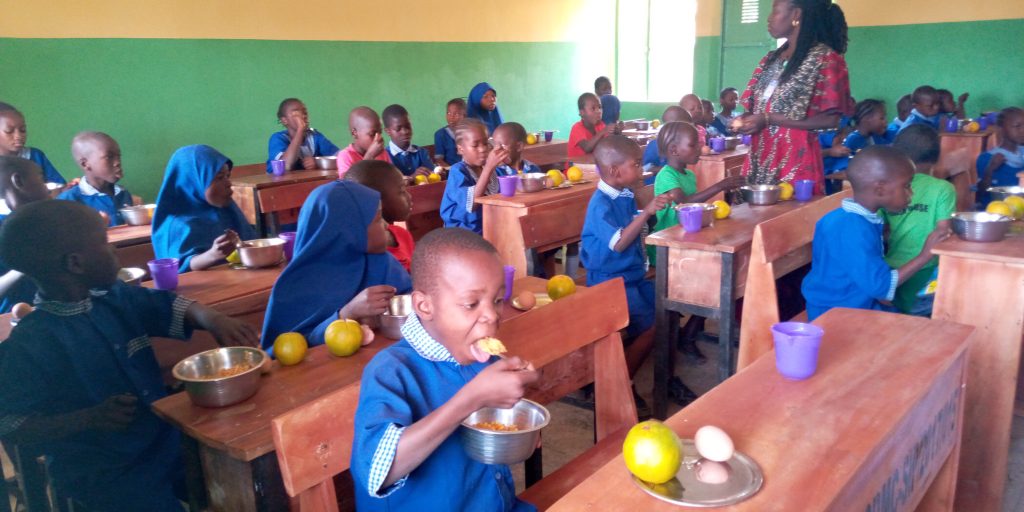 The Lagos State Government has announced that the “Snacks for Thought School Feeding” program for primary school students in the state will cost N11 billion to implement and will begin in September 2021.

Princess Aderemi Adebowale, Special Adviser Office of Civic Engagement, revealed this on Monday at the 2021Ministerial press briefing in Alausa, Ikeja, to mark the second year anniversary of Governor Babajide Sanwo-administration Olu’s in the state.

The snacks-for-thought program focuses on improving a child’s physical and cognitive growth by enhancing their learning experience, which begins with the child’s mental disposition.

“The Snacks for Thought School Feeding is a program by the state government to complement the Federal Government’s Home Grown School Feeding Program, which covers only pupils in primary 1-3, while the Snacks for Thought feeding is expected to take care of pupils at the crèche and primary 4 to 6 level so that all pupils partake in the school feeding program,” Adebowale says.

“This school feeding programme also have the tendency to serve as the socio-economic blueprint of government and in the long run prevent this generation from bequeathing a sustainable development legacy to the next generation as it does this by keeping students in school.

“When children stay in school and learn, they not only take charge of their own learning experience but also stand a greater chance of making something out of their lives while also becoming productive citizens capable of contributing to the development of the State as their formative years has been positively ensured.

“There are additional dimensions to the project other than just snacks giving such as food and nutritional security, safety and human development.”

She explained: “The state government is partnering with the private sector. We already have volunteers that would work with us, over 400 volunteers are to partake. That is why we are appealing for more Public-Private Partnerships, PPP with the government for effective implementation of the programme.

“The outbreak and effects of the COVID-19 in the state stalled the continuation of the feeding programme.

“The pilot scheme held in Lagos-Island Area covered 33 public primary schools with a total of 11,965 pupils participating in the one-week pilot school feeding exercise. The exercise is billed to recommence in September this year.”

She explained that “Multiple Indices Indicators published by UNICEF in 2018, showed an estimated 229, 264 pupils out of school in Lagos State.

“In order to curb these rising numbers, we need more than statutory allocations. Interventions such as these will not only increase the rate of enrollment but will impact positively on gender parity and equality while also serving as a preventive security measure in reducing crime and hooliganism that may, later on, disrupt the socio-economic life of the State.”

According to Adebowale, “It is also a preparedness preventive security programme that is far more than snacks-giving. It is an investment of the administration of Mr Babajide Sanwo-Olu in the common future and stability of Lagos State and an important step in building a thriving 21st century Lagos, where her citizens are not only safe but productive and also understand their Civic Rights and Responsibilities.

She added, “The Sanwo-Olu administration, in order to accelerate our children access to world-class educational learning, has aggressively embarked on the provision of blocks of classrooms, administrative offices, school furniture, modern toilet facilities, security in our schools and has continued to build teachers capacity with a high level of motivation for the teachers.

“These activities are to complement the womb to school initiative and ensure the public learn another conducive environment.”