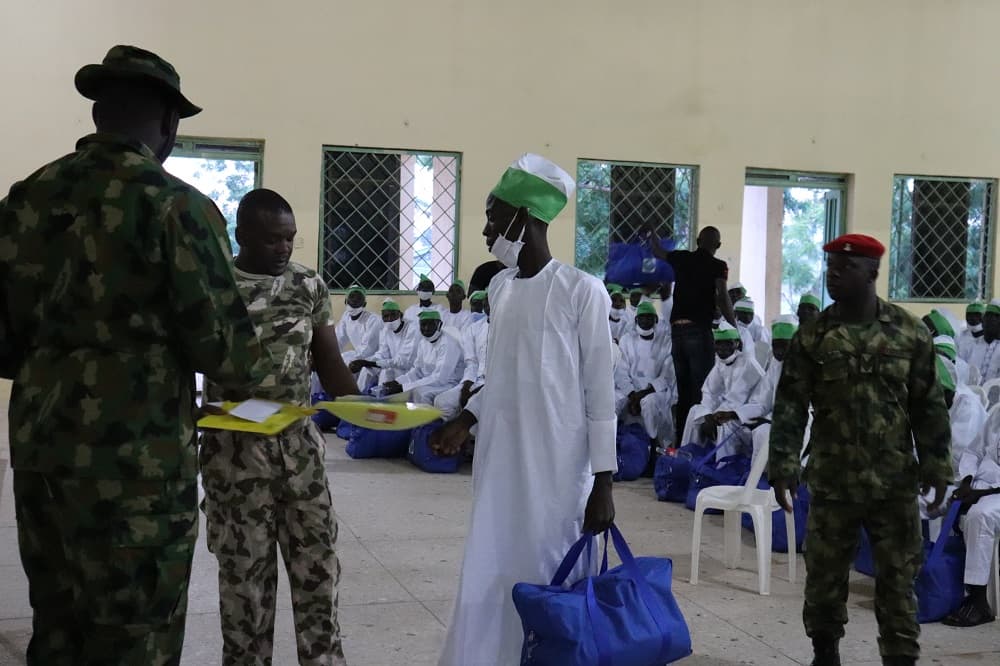 The Military High Command, on Tuesday, revealed that at least 559 former members of Boko Haram fighters are currently undergoing rehabilitation under one of its programmes being handled by Operation Safe Corridor (OPSC) called Deradicalisation, Rehabilitation and Reintegration (DRR) in Gombe State.

The Chief of Defence Staff (CDS), Gen. Lucky Irabor, who disclosed this at Defence headquarters, Abuja, during the Stakeholders’ Meeting of OPSC.

He also dismissed reports claiming that some of the over 1,000 rehabilitated ex-Boko Haram fighters have been recruited into the Nigerian military.

There had been concerns in some quarters over alleged recruitment of rehabilitated ex-fighters into the military and paramilitary agencies but the military has consistently described the concerns as “unfounded”, saying there are stringent safeguards put in place to prevent such.

Irabor, who was represented at the meeting by the Chief of Defence Training and Operations, Maj.-Gen. Adeyemi Yekini, maintained that none of such ex-fighters would as well be recruited into any of the sister security services in the country.

According to him, OPSC had improved the programme’s principles, practices and procedures over the years, making the initiative a model that had been replicated in all the Lake Chad Basin countries, adding that it has also elicited the interest of both local and international bodies including the academia.

He said, “The DRR Programme consists of psychological humanitarian treatments that reassure and provide alternatives to low-profile combatants through psycho-social/psycho-spiritual therapies, recreations, vocational training, and introductory western education, thereby countering BHT/ISWAP ideologies and reducing their recruitment drive while depleting the critical mass of their fighting force.

“The programme has so far graduated over 1,000 clients including 16 foreign nationals, who have been successfully reintegrated by their national and state governments. A total of 559 new clients are currently going through the DRR Program at the DRR Camp in Gombe State.”

Speaking further, the military chief noted that the approaches, practices, procedures, strategies, and tactics of the military in its counter-insurgency operation had continued to evolve, to effectively tackle the amorphous nature of the threat.

According to him, the initial response was a single service operation that was limited to only the formations and units based in Adamawa, Borno, and Yobe States.

“However, as time passed, several task forces were formed, eventually leading to the formation of a Theatre Command with several components including a Naval Task Force and an Aviation Task Force to weaken the insurgents.

“In furtherance of this objective, we are committed to forging stronger synergy between the Services and other security agencies. All of these efforts have re-energised the fight against the insurgents, and the AFN has continuously made progress towards ending the war in favour of the Nigerian government,” the CDS said.

On his part, the Coordinator of OPSC, Brig.-Gen. Joseph Maina, reiterated that the operation began in September 2015 to encourage willing and repentant Boko Haram members to surrender and go through a well-structured DRR programme.

He said that OPSC was a multi-agency, multi-national humanitarian scheme backed by Nigeria’s Constitution, as well as International Humanitarian and Human Right Laws, noting that OPSC had admitted over 1,070 clients comprising 1,064 Nigerians and 16 foreign nationals from Cameroon, Chad and Niger since 2016.

“All the foreign clients were transferred to their respective national authorities for reintegration. Presently, there are 559 clients undergoing the programme in the camp, out of which two clients are Chadian citizens.

“It is also important to mention that one client was repatriated to the University of Maiduguri Teaching Hospital for expert psychiatric management during the initial documentation stages of the programme,” he said.