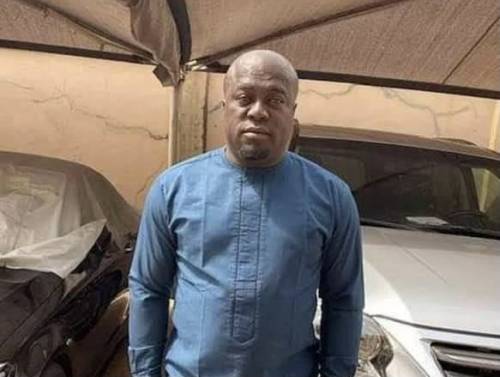 One of the men killed in the attack by the Department of State Services (DSS) at the residence of Yoruba freedom fighter, Sunday Adeyemo, aka Sunday Igboho has been identified as Adogan.

Two men were killed but the identity of the other has yet to be ascertained at the time of filing this report.

Igboho’s aide, Olayomi Koiki, who took to his Twitter handle on Friday, shared pictures of Adogan, identifying him as one of the persons killed during the attack.

He noted that Adogan was married with children.

Also, Koiki alleged that only one of the men was shot at while the other was butchered to death by the DSS.

According to Koiki, the DSS fired shots at the two men, one died, while the other was not affected by the gunshot. He noted that the other man was gruesomely butchered to death.

He wrote, “May your soul rest in peace, killed by DSS working for Nigeria government during the attack on Chief Sunday Igboho house on the 1st of July 2021.

”Let us pray for the wife and children he left behind. His only crime was he wanted the Yoruba Nation.”

Koiki also said, “One of them was shot by the DSS while the other person was not killed by bullet, they tried shooting at him but he was not affected so they literally butchered him. They killed him in cold blood.”

Meanwhile, the DSS confirmed the attack on Igboho’s house stating that they killed two allies of the Yoruba rights activist, during the invasion of his residence in Ibadan, Oyo state.

This was made known by the agency’s spokesperson, Peter Afunanya while addressing the press on Thursday. He also declared Igboho wanted, urging him to report to the nearest police station.