Former Minister of Aviation in Nigeria, Femi Fani-Kayode, has shared a picture of Kachalla Turji, the leader of a notorious banditry group operating along the Shinkafi-Sokoto axis in the north.

According to Fani-Kayode, “the sooner he is sent to his maker and the fires of hell, the better”.

“This is Turji Kachalla, leader of the terrorists that are butchering and kidnapping people in Zamfara. He is evil. He has destroyed many lives and has much blood on his hands. He leads thousands of brutal terrorists. The sooner he is sent to his maker and the fires of hell the better,” Fani-Kayode wrote on his verified Twitter handle on Saturday.

POLITICS NIGERIA recalls that popular Islamic cleric, Sheikh Ahmad Gumi, infamously met with Turji and other bandits in Zamfara forests in February. Turji was masked during the meeting.

READ ALSO: What You Need To know About Slain Sowore’s Younger Brother, Olajide

Gumi and his entourage met with Turji at Makkai forest, said to be under the firm control of the armed Fulani herdsmen.

Turji’s men were said to number more than 600, the majority of them with automatic rifles.

See the photo below 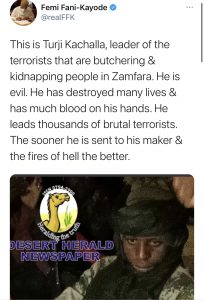