Kindly Share This
The suspect stabbed himself on the stomach and chest before bolting out of the compound by jumping over the face when neighbours stormed the compound and threatened to lynch him. 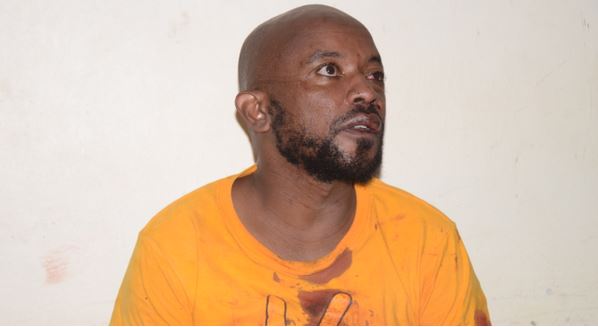 A man identified as Ken Mburu has escaped lynching after he allegedly stabbed his two daughters, aged 1 and 7 years and then tried stabbing himself using the same knife following a disagreement with his wife at Ziwani estate in Nyandarua County, Kenya.

The children are currently admitted at Nyahururu County Referral Hospital with multiple knife stab wounds. Their father is also admitted to the same facility under police guard.

The man also set their house on fire causing extensive damage during the incident which happened on Saturday evening, June 19.

It is not clear when the man went berserk and stabbed the two minors, but Mary Wangari, who is a neighbour of the couple said the man, whom she described as violent, had been insisting that the minors’ DNA be conducted to ascertain their paternity.

“I have been into this house multiple times to solve their disputes, the last time I was here the man demanded that a DNA test be conducted to ascertain the children’s paternity and threatened to kill them,” Wangari said.

However, his wife, Martha Nyambura, who was away during the incident said it could have been an escalation of a quarrel they had on building a kennel for a dog Ken had brought the previous day.

“He had come home with a dog the previous night and demanded that I cater for the construction of its kennel but I refused. I left my children playing in the compound only for me to return home and find a multitude gathering there,” she said.

The suspect stabbed himself on the stomach and chest before bolting out of the compound by jumping over the face when neighbours stormed the compound and threatened to lynch him.

By the time he ran away, he had managed to start a fire inside the house using the family gas cylinder however, the fire had destroyed the property by the time fire engine from the Laikipia County government arrived from Nyahururu town for rescue.

A neighbour, Samuel Muturi who had to access the compound by jumping over the fence found the one-year-old girl wailing painfully while calling for her mother while the elder girl was pleading with their father to stop.

“I was attracted by screams from the children when I arrived at the home I found the gate locked from the inside and decided to jump over the fence. I found the man holding a knife and was continuously stabbing the younger girl while the elder girl who was lying on the floor was bleeding profusely, pleading with her father to stop,” Muturi said.

Muturi said more neighbours joined him after managing to break the gate.

“We begged him not to hurt the kids and let us help him solve his problems. That was when he rushed to the house, set it ablaze using a gas cylinder before he stabbed himself several times on the stomach and chest, jumped over the fence, and took off with neighbours in hot pursuit,” said another neighbour Esther Wambui.

Area Chief, Mary Kimani said that the angry neighbours wanted to lynch the man but he was rescued by officers from Mairo Inya police station.

“Police officers from Mairo Inya Police station rescued the man from angry residents who were baying for his blood. Firefighters from the Laikipia county government arrived at the scene and managed to put off the fire, however, nothing was salvaged,” the administrator said. 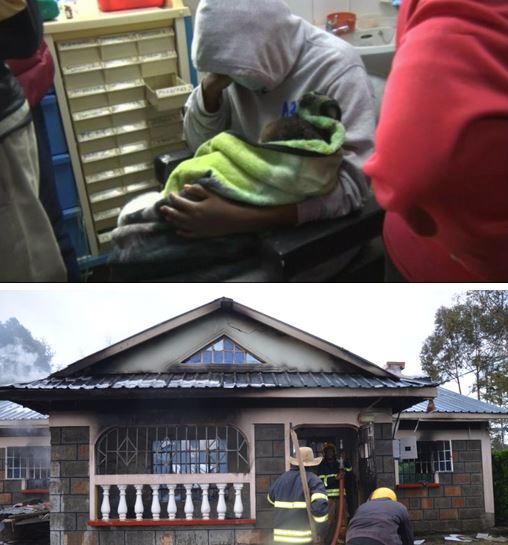