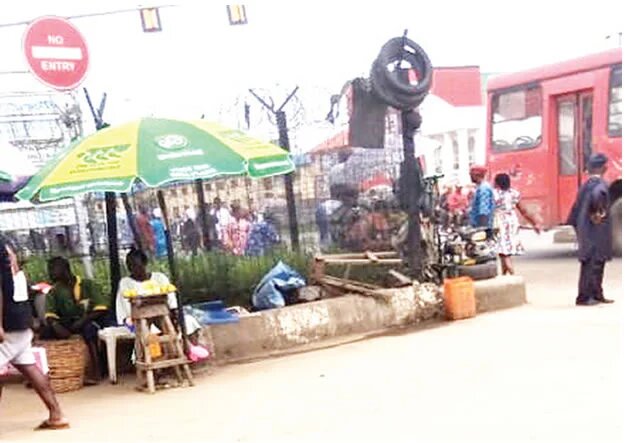 A member of the National Union of Road Transport Workers, Rasheed Yinusa, has lost his life during a brawl with a lotto agent, Abdulazeez Olasupo, around the Benson area of Ikorodu, Lagos State.

The source gathered that Yinusa, aka Apase, visited the lotto agent’s shop and placed a bet of N500.

A resident, who gave his name only as Segun, told our correspondent that things took a different turn when Olasupo, after printing the bet, requested payment.

“Yinusa became annoyed and complained that he was asking him for the money as if he would run away.

“Out of annoyance, he slapped the lotto agent. Yinusa further went ahead to give the lotto agent a headbutt. At that point, he (Yinusa) became weak and slowly fell on the ground.

“People, including other customers, quickly accessed him on the ground and discovered that he had a crisis. They rushed him to a nearby hospital, where he was confirmed dead,” he added.

A trader in the area, Ibijoke Alebiosu, alleged that the late union member was fond of staking bets without paying.

She said, “The money that caused the argument is between N200 and N500. Yinusa was fond of staking bets without paying. He was an NURTW member and usually collected money from commercial buses at Benson Bus-stop.

“Surprisingly, he was the one that fell on the ground and died on the spot. The lotto agent did not attack him; the saving grace of the agent was that the incident did not happen somewhere hidden, but at the front of his shop close to the Unity Bank at Benson Bus-stop.”

The source gathered that Olasupo was initially arrested, but was released after witnesses testified to what transpired.

Yinusa’s family members were said to have also refused to press charges.

The family reportedly approached a court to swear to an affidavit to claim his corpse for burial in accordance with Islamic rites.

The Lagos State Police Public Relations Officer, CSP Adekunle Ajisebutu, said, “I will get back to you soon after being properly briefed.”