Many people live fake lives for the purpose of commanding respect in the society. 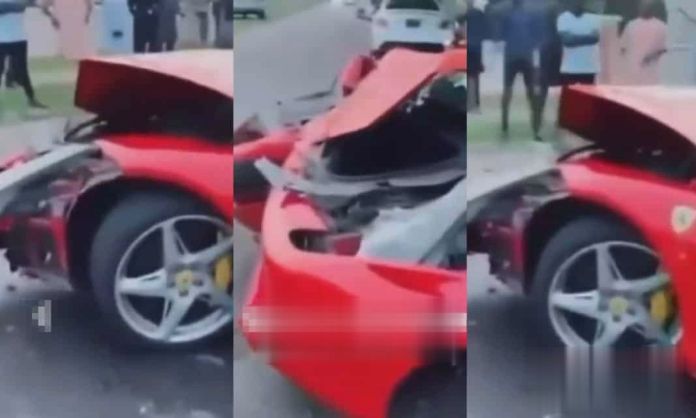 Fake life usually has its consequences, and a young man has got the consequence of his own fake life.

Trending video – Video currently circulating online shows a red Ferrari with its bumper and bonnet badly wrecked as if it was featured in a Fast and Furious movie chauffeured by an amateur driver.

In the video, the Ferrari car could be seen parked by the roadside after it was crashed by the man, who was said to have rented it to impress a girl.

Apparently, the driver of the Ferrari who was obviously inexperienced was taking the car for a spin only to get it crashed.

An unidentified bystander who recorded the viral video of the severely damaged Ferrari could be heard rebuking its driver who was nowhere to be found at the time of the crash.

The voice in the video was heard quizzing how the young man was going to pay for such damage since he did not own the car and was expected to cater for any form of damage to the car.

As of the time of filing this report, the identity of the driver and the location of the incident cannot be ascertained.