The award was conferred on the young technocrat at the investiture ceremony of the 8th president of the Rotary club of Ilorin G.R.A. District 9125, Rotary International Nigeria.

The investiture and inauguration ceremony was held in the capital city of Kwara state, Ilorin, on the Saturday 18th, September 2021 and was well attended by dignitaries, the Assistant District Governor D9125, and the big wig of the Rotary family.

Rtr. Nayo in his words described the award recipient as a very objective, development passionate and a core humanitarian with a large heart of service. 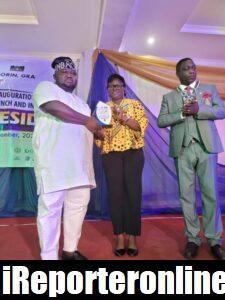 “Indeed it pays to serve Humanity !
I’m not surprised with the recognition of Hon. Olobatoke by the club, and also the prestigious conferment of a Humanitarian Service Award, even in the mud a well refined gold will still shine”

“Otunba has over the years proven to be outstanding indeed with his numerous and strategically executed Humanitarian deeds and development strides.

He’s commitments to value building, credible and effective leadership and social economical development and productivity has established the unmatchable and prolific strength of his technocracy”

The award is a long due and well deserved one.
congratulations to a quintessential human and capital developer and Humanitarian par excellence he said.

He further congratulated the new club president Rtrn. Dr. Michael Oguntoye (PHF), the entire club member and the change-maker club board of directors (BOD’s) for a successful and wonderful investiture and inauguration ceremony.

He closed his statement by encouraging the awardee Otunba Olobatoke Michael Olaiya to take a bolder step of becoming a member of the Rotary family so as to enjoy the fellowship, friendship, networking and consistent and active service to Humanity as made available to all jolly good fellows and family of P Harris.

You’ve been a great source of inspiration to me and to many, we wish you even greater achievements beyond Human compression.
Congratulations OTUNBA of the confluence!

Meet Wole Soyinka’s Look-alike That Gets Everyone Talking (Photos)