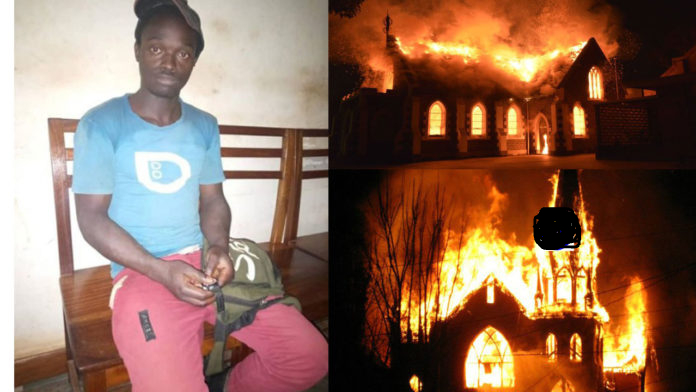 A young man, 21 has found himself in the grips of the police after he reportedly set ablaze three churches because he is still poor.

The incident is said to have happened in Uganda in Kasokoso Kira Municipality in Wakiso District, precisely.

The young man identified as John Reagan Ngobi after his arrest explained his actions on why he set the three big churches on fire destroying properties.

He said the said churches keep preaching about prosperity yet he is still poor that he can’t afford anything.

From the source gatherings, the churches which were burnt include; St Noah Catholic Church Kasokoso, Liberty church of Christ international for Born Again and God’s Tour promising church located in Kasokoso, Uganda.

A police statement was issued shortly after his arrest. It reads:

“That his poverty situation motivated him to buy two liters of petrol and one for paraffin which he used to burn church property with the intent to burn the churches completely to ashes. In his mind up to now since he left the fire burning in these respective churches, he still believes that the churches were completely burnt,” in part reads the statement from police’.