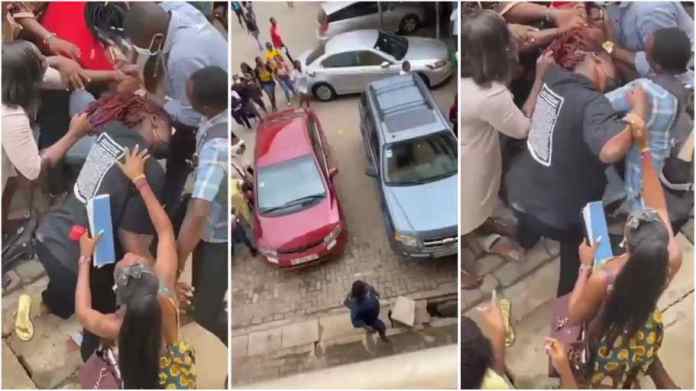 Two students of Accra Technical university have been captured in a video fighting over a man on campus in broad daylight.

According to reports, the duo fell out over a man who is said to be dating the two of them together.

Reports suggest that the said man is known in the vicinity for extravagant lifestyle of which the two ladies were beneficiaries without the knowledge of the other.

It is unclear how they came to the realisation that they were actually rivals, but as the reality dawned on them, they engaged in exchange of words before proceeding a step further to exchange fisticuffs.

The two ladies caused massive drama as they tore at each other with kicks and blows.

One of the ladies braid hair was nearly yanked off,but it did not deter her from fighting for what she thought belonged to her.

The fight was so intense that it took the intervention of tons of people to separate the ladies.

Drama As Man Catches Prophet Sleeping With His Wife (Video)

After Destroying My “[email protected]” With His Huge Stick, He Ran Away With My Money – Slay Queen Laments