The ultimate victory in competition is derived from the inner satisfaction of knowing that you have done your best and that you have gotten the most out of what you had to give. ~ Howard Cosell

Yesterday completed a whole full year when Edo residents took to the polls to choose who would become their governor for the next four years. The battle was fierce but in the end, Godwin Obaseki emerged victorious, defeating his closest rival, Pastor Osagie Ize-Iyamu. 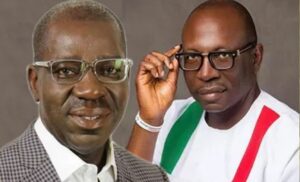 The electioneering campaign preceding the September 19th 2020 gubernatorial election was very intriguing and Edo witnessed what we can translate as the Big Swap.

Obaseki found himself in the PDP which happens to be the opposition party as at then, while Pastor Osagie Ize-Iyamu who was the PDP candidate in the 2016 Edo Gubernatorial polls became the official flagbearer of the APC.

One year after what are the political gains and the social-economic gains of the aftermath of the Governorship poll?

What benefits has PDP as a party gained from assuming the status of the ruling party?

How has the opposition party the APC  fared since losing the governorship seat to Obaseki and the PDP?

And finally how has the citizens of Edo State managed one year after? Has the Governor and the political class lived up to expectations?

It is unfortunate that Edo State has not witnessed a single political gain whatsoever since Obaseki won his reelection. Obaseki who prior to the elections appointed thousands of aides is currently functioning as the State Governor with no aides to assist in the running of the affairs of the State.

What offence did these special aides commit to necessitate their sack without a replacement? If their appointment in the first place was to work for the growth of the State then who is now filling the vacuum that has been created by their sack? Or is the special duties no longer necessary for the residents of the State?

Obaseki has refused to constitute a cabinet one year after and he has refused to conduct local government elections to usher in new council chairmen and their councillors. Or should we talk about the EDHA imbroglio where the majority of constituents have been denied representation for years?

Tactically Obaseki has denied over 90 % of citizens their right to effective representation which shows insensitivity on the part of the Governor. These special assistants, Local Government Council Officials (chairmen and councillors), Commissioners and House of Assembly members are supposed to be representatives of constituents meant to push the agenda of their locality at the front burner in governance.

So politically the state has received no gains but instead has taken 20 steps backwards. Political jobbers are out of jobs and have joined the league of Jobless citizens.

What has the PDP achieved?

They are battling to retain their party structure which they allege the Governor and his Deputy are fighting hard to take control off. The case of PDP and Obaseki is like the story of the Lion and the sheep.

The sheep was passing and saw a lion crying inside a cage trap and the lion begged the sheep to save him with a promise not to kill and eat it but the sheep refused. After much persuasion and for the sheep’s gullibility it opened the cage for the lion.

Now the lion was very hungry having stayed in the cage for days without food. It quickly grabbed the sheep to kill and eat but the sheep reminded him of his promise. You can google the rest of the story, it’s worth the read.

Moral of The Story:
Don’t support evil today because it doesn’t affect you directly, tomorrow it could be your turn. Likewise, the seed of negativity we plant today may come back to haunt us in the future where the weeds grow uncontrollably and deprive the main crop of its nutrients. The PDP today is wailing uncontrollably.

Who would redeem the PDP like the Tortoise redeemed the Sheep is left to be seen?

How has the opposition party the APC  fared since losing the governorship seat to Obaseki and the PDP?

Today the leadership of APC is savouring with joy over their vindication, the gubernatorial candidate in the last election, Pastor Osagie Ize-Iyamu has been ultimately exonerated from the high propaganda deployed against his personality. His simple agenda seems to be a panacea to the myriads of problems facing the State.

Finally, has the State prospered any better one year after the elections?  What project has been commissioned in appreciation of the votes the citizens gave Obaseki?

Security-wise Edo State is far staggering behind, residents can not sleep with their two eyes closed and armed bandits seems to have taken over the State Highways with impunity. The recent killing of Sowore’s younger brother is a clear attestation to the dangers intrinsic in travelling on our highways.

Economically the State is stagnant, rated as one of the worse states with a low transparency index. If at all projects are to be executed the trio of the Governor, his Deputy and the Secretary to the State Government takes the decision. What now happens particularly now that the rumour is rife that the Governor has a serious misunderstanding with his Deputy? Who now takes decisions for the State?

So every day the decision-makers are streamlined thereby putting the State in a  single pedestrian lane. What progress can be achieved with a lone decision-maker for the State?

Traffic lights are no longer working in the State, traffic lights I said and not street lights o. The maintenance culture of the State is fast depleting. Gutters are stuffed with debris thereby giving motorists and residents a hell of a time navigating around whenever it rains. The Health sector is not left out and in a pitiable state.

It is 365 days since the elections that saw Obaseki defeating the PERCEIVED GODFATHERS and today the state is under the firm grip of one man, god the papa, god the pikin and god the followers.