Edo State government on Monday said it had arrested COVID-19 response team officials for issuing fake vaccine cards to Nigerians that refused to get vaccinated. 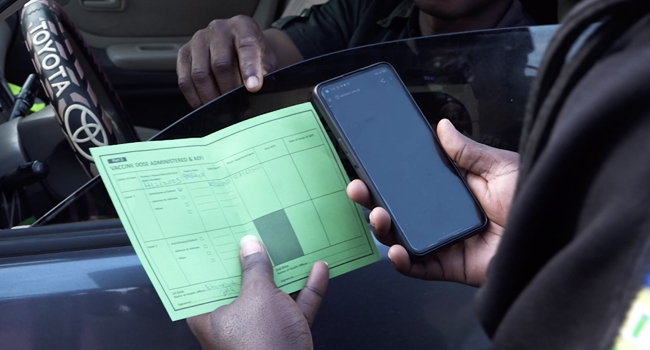 Speaking to reporters, the permanent secretary of the state ministry of health, Osamwonyi Irowa, said the suspects have been handed over to security agents in the state.

“We have noticed with dismay that some persons are trying to buy cards.

“And, we have also found out that some people within the system, within the response team, were trying to connive with some people who tried to buy cards without taking the vaccine.

“In that light, we have also gotten those persons, and we have handed them over to the security agents, and they are being handled officially the way they must be handled,” Mr Irowa said.

He stated that those buying the vaccine cards would also be arrested and handed over to the security agencies for prosecution.

Meanwhile, he urged pregnant women and nursing mothers to take the vaccine, saying it has no side effects.

“Nursing mothers can take the vaccine.

The vaccine doesn’t have any negative effects.

Studies have been done, and it has been shown that nursing mothers can take it.

“Actually, pregnant mothers can take it.

The physician will determine a few things.

Read Also Why I Am In Shock – Buhari Reveals

In medicine, there are things that are not cast in stone.

“In that light, we need to discuss more, and we have given directives to the security agents who are enforcing some of those criteria,” he added.

The spokesperson to the Edo police command, Kontongs Bello, did not respond to calls and text messages to confirm the arrests and the number of suspects.

Why I Am In Shock – Buhari Reveals