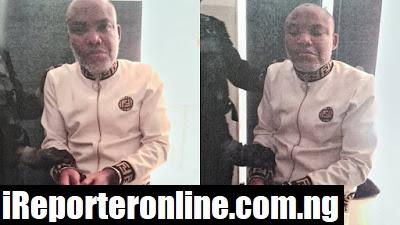 A US-based Nigerian academic, media scholar and columnist, Farouq Kperogi, has revealed how he was informed about the plan to arrest Nnamdi Kanu, the leader of Indigenous People of Biafra, IPOB early this month.

Mr Kperogi however said his source gave him the information on the condition that he would keep it to himself.

He said the secessionist leader does not deserve the sympathy of right-thinking Nigerians for promoting violence and hate.

While the mass resentment against Buhari in the Southeast is a justified response to his systematic exclusion of and open rhetorical and actual hostility to the region, Nnamdi Kanu is NOT a symptom of the Southeast’s legitimate angst. He is a different but related problem.

Kanu is a violent, vulgar, venomous-tongued, and ignorant thug that should never have been allowed to exploit the valid angst of the Southeast to rise to prominence. The intolerant, unthinking IPOB cult he has built has become a problem not just for Nigeria but for the vast majority of Igbo people everywhere.

When Kanu was burst forth to the forefront of national and international visibility in July 2015 through the Buhari regime’s thoughtless handling of Radio Biafra, I took the time to listen to him on Radio Biafra. I found a man gibbering vulgar, violent, incoherent, hate-filled but comical rants. He called Nigeria a “zoo”— or the “zoological republic”— and Nigerian citizens “monkeys” or “ill-educated vagabonds.”

He labelled Igbos who didn’t share in his idiocy as “Hausa-born children in Igboland.” His rants were also filled with racially self-hating, negrophobic rhetoric, such as his claims that black people were inherently intellectually inferior and incapable of deep thought. He said he was a “Jew.” He hasn’t changed since then.

He makes no effort to be persuasive. He simply revels in tasteless abuse, intentional prevarications, infantile temper tantrums, and a melodramatic display of rank, comical illiteracy. In my July 2015 column, I said the only people who would take him seriously and be affected by his message were people who already shared his twisted, hateful ideals, which made shutting down his station pointless. “I can bet that it does not speak for nor reach the majority of Igbo people, and that most Igbo people would snigger when they listen to it,” I wrote.

But the Buhari regime made Kanu more popular than he is worth. He was spewing his rib-tickling inanities on the fringes of the Internet and on a barely known radio station. Then, suddenly, when he started attacking President Buhari, Nigerian authorities moved in swiftly to contain him. They announced that they had successfully jammed his radio station but came back a few days later to refute an alleged libellous falsehood the station made against Buhari!

Of course, news of the “jamming” of the radio and the press release refuting what the station reportedly said against Buhari (after it was supposed to have been jammed!) caused the station—and the ideology it espouses—to make national and international headlines. And there was an enormous spike in the number of searches for “Radio Biafra” and “Nnamdi Kanu” on Google and other search engines.

This, combined with Buhari’s unambiguous antipathy toward the southeast, has sparked a resurgence of Biafran and neo-Biafran movements and periodic sanguinary communal upheavals. This was completely avoidable. If the government had ignored (or quietly diluted) Kanu and his Radio Biafra and demonstrated even token large-heartedness toward the southeast (and the deep south) in the immediate aftermath of Buhari’s epochal electoral triumph in spite of opposition from the region, we wouldn’t know of Kanu and IPOB. But Nigerian authorities couldn’t stomach an insult at Buhari.

Whatever it is, I have no tears for Kanu. No reasonable person should. But I think the man needs more sorrow than anger because he is obviously mentally unhinged.

JUST IN: Nnamdi Kanu Was Kidnapped From UK – Sowore

JUST IN: Tension In Southeast Over Nnamdi Kanu Arrest