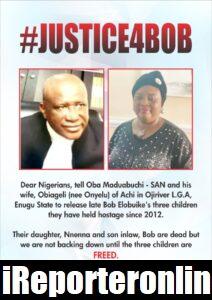 Dear Nigerians, as you all are aware, we have launched a formidable crusade for Justice for our dear late friend, Bob Elobuike. We are friends of Bob and we are firmly united home and abroad with one goal and one mission in mind which is to ensure the return of three children of our late friend Bob Elobuike to Elobuike’s family from Oba Maduabuchi SAN that is currently holding Bob’s children hostage. We will continue to use every means to fight including the use of court of public opinion, print media, electronic media, social media, solidarity rallies and Protest to fight for Justice for our dear late friend Bob Elobuike since Oba Maduabuchi SAN is avoiding to meet the family of late Bob Elobuike in court.

(2) All three children seized by Oba Maduabuchi (SAN) and wife since 2012, are products of the marriage.

(4)The SAN did not let Bob’s children witness their father’s burial.

(5)The SAN’s wife, Obiageli Maduabuchi stopped her daughter and the children from attending Bob’s first-anniversary memorial in December 2017.

(6) News of Late Bob’s wife, Nnenna’s death broke through her father in March, 2020. Her father, the SAN, Oba Maduabuchi defied all laws and buried her in his own hometown rather than her husband, Bob’s place. The SAN it appears, fears any form of contact between the children and their paternal family.

We are the friends of late Bob Elobuike who was married to late Nnenna, daughter of Obiageli and Oba Maduabuchi, SAN. We know and can testify as follows:

1. Bob confided in some of us that the overbearing presence of his mother in law, Mrs. Obiageli Maduabuchi with her other children in his 3-bedroom apartment was suffocating him.

2. Bob was denied access to his three children from 2012 when his wife, Nnenna eloped with them first, to Jos and later, to Abuja until he died in 2016.

3. None of us who accompanied him at different times to either Jos (Mrs. Maduabuchi’s residence) or Abuja (after Mrs. Maduabuchi reunited with her husband, Oba, the SAN) can account for a successful mission. Bob each time, returned to Enugu feeling dejected.

4. Sometime in 2014, an ex- son in law of the SAN who hosted Bob’s wife and kids during their visit to Enugu, contacted and alerted Bob on the presence of his family in his house. Bob gathered what he could, invited one of us to accompany him to see his children then aged about 6, 4 and 3 years old but, only the first child could recognise him and took a while to warm up to him. Bob went to a corner and wept profusely. He thanked the husband of his wife’s sister who he never knew, for the opportunity he gave him to see his children and told him he would be back to see them again the following day when their mother (Bob’s wife) was expected to also be around. Later that day, Bob received a call from Nnenna, his wife informing him that she has relocated with the children and that he should go to her sister’s gate and pick up a bag containing some toys he had earlier taken to his children.

5. Bob mentioned to a couple of us that his father in law told him he would kill him.

6. During one of our last outings with Bob in late November, 2016, the day he returned from Abuja, he stated that he might never be able to see his children before he died. He did not see them until he died on December 6, 2016.

8. Asked why Bob’s children were not present to give their late father the last respect, Bob’s siblings said his father in law, Oba Maduabuchi, SAN refused to release his children for the burial.

9. In the cause of periodic checks on Bob’s aged parents, we learnt that they are re-living the tormenting experience of their late son with Oba Maduabuchi, SAN and wife, Obiageli. Oba Maduabuchi and his wife still won’t let them see their grandchildren.

10. In late August, 2020, we were notified by Bob’s siblings, of the death of Bob’s wife, Nnenna and then invited to her burial, fixed to hold on September 4, 2021, at Eke. On the 3rd of September, following a radio announcement cancelling the event, we confirmed from the Elobuike family that Oba Maduabuchi, SAN has jettisoned the agreement to let the children be with their father’s people for a day or two ahead of their mother’s burial, as reached before the Igwe of Eke and that of his town, Ehuhe Achi both in Enugu State.

11. We later learnt that the SAN, Oba Maduabuchi buried our friend’s wife on that same day but in his own village compound at Ehuhe Achi in Ojiriver L.G.A.

12. We also learnt that he denies that our friend, Bob Elobuike’s numerous attempts to see his kids were frustrated. We want to look him in the face and tell him with proof, how callous he has been to late Bob, his young children, aged parents and even his late daughter, Nnenna. What we are worried about is that the court has not given us that chance in the past one year that we have been standing by to testify with the hope of bringing justice to the Elobuike family so that our friend may rest in peace.

Our dear friend, Bob died bearing the aching desire to reconnect with his children. Bob’s aged parents are subjected to the same emotional torture by Oba Maduabuchi, SAN and his wife, Obiageli. Bob Elobuike’s three children deserve to know their people and where they come from. Their paternal grandparents are both alive and wish they can have contact with them so they can learn directly from them, Eke people’s way of life.

We call on all Nigerians to join us the crusaders of Justice for Bob Elobuike to call on Oba Maduabuchi SAN to return the three children of Bob to the Elobuike’s family without further delay.