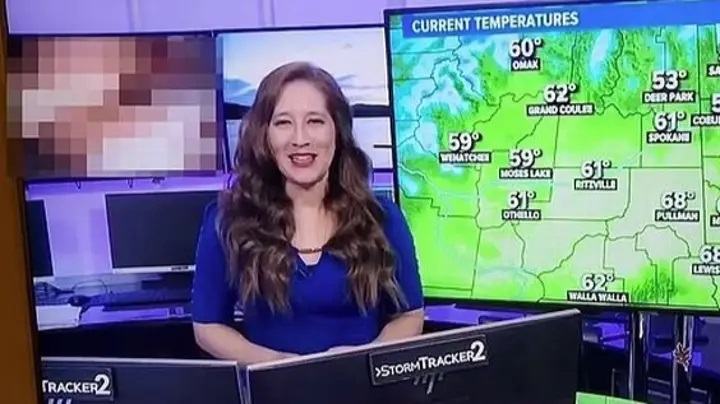 KREM, a Spokane, Washington-based news station, accidentally broadcast the explicit clip during a weather report that aired at 6.30pm over the weekend.

Meteorologist Michelle Boss reported that the state was expecting “some bonus days of nice weather after a gorgeous weekend of mild temperatures,” seemingly completely unaware of what was being played in the upper left corner of the screen.

In the pornographic video a woman lying in bed. The camera then scanned down her body and showed her bare backside.

According to TVSpy, KREM apologized to viewers hours later, during the 11 pm newscast.

“An inappropriate video aired in the first part of the show. We are diligently working to make sure something like this doesn’t happen again,” the anchor said.

The Spokane City Police Department on Monday, issued a statement saying that the department’s Special Victims Unit (SVU) and Technical Assistance Response Unit (TARU) are investigating how the image appeared and where it came from.

“The Spokane Police Department Special Victims Unit responded to a local news outlet Sunday evening after a disturbing image/video appeared on the screens of viewers during the station’s weather report.

“Around 6.30pm on Sunday SPD began to receive calls regarding what was described as a pornographic or explicit image appearing during a television weather forecast.

“It was a short video segment, generally described as a small portion of the screen, showing a separate image from the newscast of what appeared to be a possibly pornographic or explicit image. Estimates were the image/video lasted about 10 seconds.”

The statement continued: “The Spokane Police Department’s Special Victims Unit (SVU) and Technical Assistance Response Unit (TARU), responded to the local station to conduct an investigation as to how the image appeared and where it came from.

“The station’s personnel are cooperating fully with SPD in the attempt to determine what happened.

“The incident generated numerous calls from concerned citizens in the city and county. At the time of this release, the investigation is ongoing and no culpability of any kind has been determined.”