A man who sells roasted plantain commonly known as Bole has gone viral after he was spotted plying his trade while donning a corporate outfit, which consists of a clean white shirt and tie. 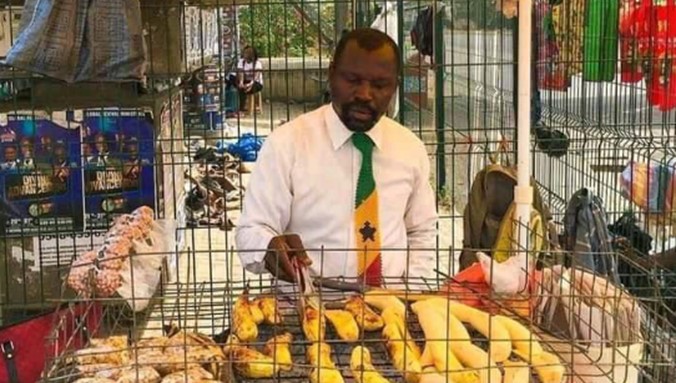 The man was captured selling Bole and groundnut around Accra Mall in Ghana and a Twitter user, Okyere Kwame Tawiah shared a photo of the man.

Interestingly, some other tweeps revealed that he also sells roasted corn in the same outfit.

”He is around Accra Mall just under the footbridge. Buy from him when you visit that area…”

The post has garnered over 8k likes and retweets as of the time of filing this report. Social media users flooded the timeline to share their thoughts.

In reaction, @Manu_marfo said; On his way to making his first million. Someone should sell water beside him

@yaw_ziggy_tv; The government have lifted his position to corn roaster

@jeosbaba; If this man was to be in Port Harcourt, Nigeria…swear it will be a lucrative business for…. at least a plate of Bole here at Odili road cost N1500

@sonofomenuko; Because his grills are delicious and hygienically prepared or just because he is wearing shirt and tie?

@Damilee_; A apron will be dope for this man. Any printer in Accra should please make a customised apron for this bros abeg
@Hozoneblunts_; Tbh, the dressing is very unnecessary for what he’s selling but most of you will still disagree