T-shirts and caps bearing dot-in-circle images have surfaced in the South-East states after President Muhammadu Buhari described the Indigenous People of Biafra (IPOB) as a dot in a circle which could not secede from the country.

SaharaReporters saw the images of the clothes and caps with “Onye dot” written on them in a satirical reference to Buhari’s reference to IPOB agitators in his interview last Thursday with Arise Television. It is not yet clear who the producers of the branded shirts are. 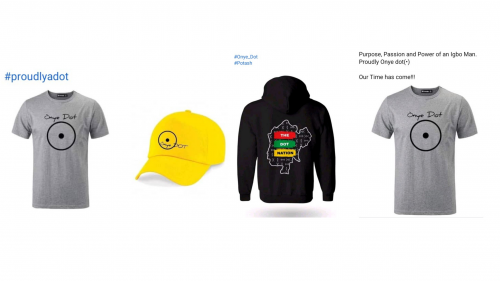 President Buhari had threatened that his government had mobilised and would continue to mobilise the military and the police to go after the IPOB accused of disturbing the peace in the South-East region.

“They don’t know what they are doing. How we will handle them is to mobilise the police and the military to go after them.”

Also, Buhari had slammed those calling for the sovereignty of the Biafra and Oduduwa Republics, saying they were ignorant.

The president stated that he expected them to be thinking of how to be suggesting initiatives to attract investors to the country.

The IPOB, led by Nnamdi Kanu, has been clamouring for the sovereign nation of Biafra as a result of alleged marginalisation, killings and hatred being shown to Igbo people.

In the same manner, Oyo-based rights activist and businessman, Sunday Igboho has gained massive support in the South-West in his demand for Oduduwa Republic for Yoruba people.

Buhari during the interview said those agitators are delusional in their thinking as they neglect the issue of resources for Nigerians to survive.

“Yes, I think of Nigeria. Nigerians can say what they want to say. They want their republics. They don’t think about resources. How to share what we have.

“They don’t think (of) how to win the confidence of investors. I think they allow their ignorance to disorganise the country,” Buhari had said.

Osun: Police Apprehend Man Who Killed Girlfriend For Ritual Purposes After Having Sex With Her